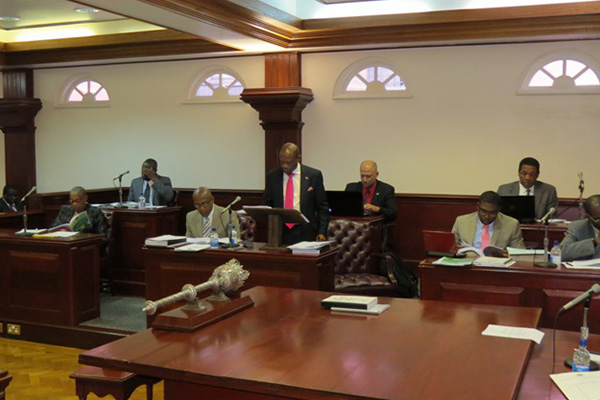 Basseterre, St. Kitts (CUOPM) – Notwithstanding the mixed developments in the global economy, the Federation of St. Kitts and Nevis continues to show signs of an easing in its economic situation evidenced by a slowing of the contraction in economic output to 0.9% in 2012 when compared to an average decline of 3.2% during the period 2009 to 2011.

“This can be attributed to positive growth in the Manufacturing and Tourism Sectors which expanded by 10.2% and 2.4% respectively. In June 2013, preliminary estimates indicated that the economy had expanded by 2.0% during the first six months,” St. Kitts and Nevis’ Prime Minister and Minister of Finance, the Rt. Hon. Dr. Denzil L. Douglas told the Budget Session of the National Assembly Tuesday morning.

He said that the International Monetary Fund (IMF), having concluded its fifth and sixth reviews of the home-grown  Standby Arrangement (SBA), have also projected an expansion in economic activity of 2.0% in 2013 based on the expected upturn in the Tourism Sector and the mobilization of several large construction projects.

“This positive report is confirmation of the success of our carefully executed economic plan that has placed priority on the continued diversification of our economy and the provision of stimulus packages where required to counter the negative effects of the global slowdown in preparation for a solid rebound,” Dr. Douglas said.

He said that on a period to period basis, the rate of inflation for the first six months of 2013 0.6% as compared to the 1.4% recorded for the comparable period in 2012. This can be attributed to the continued stabilization in prices over the three years since the implementation of the Value Added Tax (VAT).

“As inflation in the local economy is influenced by developments in commodity producing countries, we will continue to monitor fluctuations in the global market in order to devise new strategies to counteract emerging negative effects for the benefit of our people,” Dr. Douglas said.

“Due to the small size of the economy and its narrow resource, population and skill base, imports consistently exceed exports, resulting in a structural visible trade deficit which has averaged 28% of GDP over the 2007-2012 period.  Surpluses on the services account, particularly tourism receipts, are instrumental in containing the current account deficit which has averaged 19% of GDP over the same period.  Current account deficits are also contained by regular surpluses on the capital and financial account, which reflect direct investment and monetary flows.  Foreign direct investment inflows play a major role in this regard.”

Prime Minister Douglas noted that based on preliminary data on the performance of the external account, a current account deficit of $222.4 million is projected for 2013 – a 13% increase over the deficit of $196.3 million recorded in 2012.

This he said reflects the impact of increased imports of capital goods and intermediate imports as activity associated with the increased levels of economic activity in the Construction and Tourism Sectors in particular.

“The surplus on the services account is expected to increase by about 1% to $203.5 million or 10.7% of GDP as a result of a projected increase in net travel receipts as the tourism sector continues to record increased levels of stayover arrivals.  The surplus on the capital and financial account is projected to record a significant increase mainly as a result of strong foreign direct investment inflows related to the Citizenship by Investment programme.  As in previous years, the surplus on the capital and financial account is expected to be sufficient to offset the current account deficit, resulting in an overall surplus of about $116.3 million or 6.1% of GDP,” said Prime Minister Douglas.

He said that the United States remains the country’s main trading partner, accounting for 64.4% of imports and 86.3% of exports.  Trinidad and Tobago and the United Kingdom accounted for 6.3% and 4.1% of 2012 imports respectively.