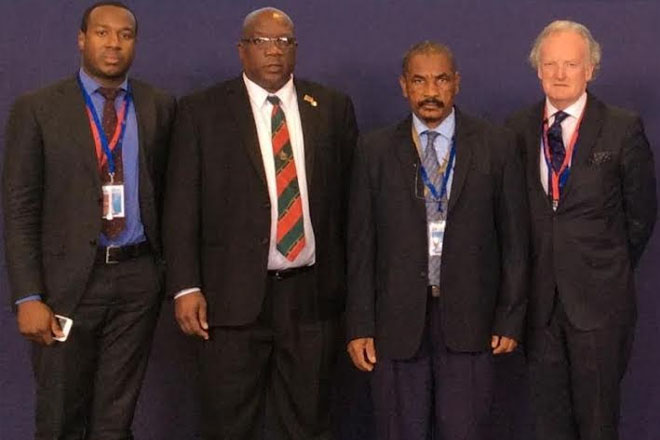 He was attending the EU-CELAC Summit – the core high-level negotiating forum linking Latin America, the Caribbean and the European Union, and was joined by 53 Heads of State. The Summit focused on strengthening the strategic partnership between the two regions, notably on issues relevant to citizenship, security, world trade, migration, climate change, energy, the international financial architecture, financing for development and financial and economic regulation. The combined Latin American and Caribbean region is already the 2nd largest trading partner for the EU and is a most significant recipient of EU foreign direct investment.

In a positive early signal of the EU’s commitment to the Caribbean, the opening statement by European Commission President, Jean-Claude Juncker, revealed that the EU would allocate one billion Euros in development funds to the Caribbean region to address climate change challenges.

“The importance of this EU-LAC Summit cannot be overstated,” remarked Prime Minister Harris. “The EU is emerging as the single largest multilateral development cooperation donor entity vis-à-vis the Latin American and the Caribbean Region. At the regional level, St. Kitts and Nevis is proud to have been one of the Caribbean signatory states in 2008 to the Economic Partnership Agreement, between the Caribbean Forum (CARIFORUM) and the EU – a critical framework to facilitate trade, investment and development assistance easier for all parties, in particular promoting regional integration.”

In his various interventions at the formal sessions, and on the fringes of this ministerial summit, Prime Minister Harris stressed the need to look beyond the strengthening regional integration and trade liberalization; whilst underlining St. Kitts and Nevis’ long-term commitment in the pursuit of building sustainable strategic partnerships with the EU in areas like development cooperation and aid programmes.

“It is critical that that our key EU partner recognizes – and helps us to address – the various structural rigidities and supply-side constraints that afflict small vulnerable economies like ours,” he said. “Rules that provide for access to markets are not per se effective tools for development when supply-side constraints act as a break on resource optimization.

“We thus look to the EU-CELAC framework to offer more scope for attracting investment in key sectors identified as the drivers of growth in St. Kitts and Nevis: Tourism, ICT mainstreaming and Construction.

“Specifically, we see direct benefits of the EU galvanizing existing programmes such as Al-Invest and the operationalization of the Caribbean Investment Facility (CIF), to enable St. Kitts and Nevis to enter into cooperation arrangements and memoranda of understanding with entrepreneurs, chambers of commerce, investment promotion agencies, business owners and government leaders across Europe in order to spur investments on the ground. Particularly relevant to our small economy are activities in energy efficiency, small scale fisheries and aquaculture, water management, small-medium enterprise development (including business incubation) and public sector modernization.”

“As a small island developing state, we would argue that we are a special case, characterized by vulnerability, remoteness and the adverse effects from natural hazards, not to mention the continuing worldwide financial crisis,” he said. “In this light, criteria such as GDP per capita, to determine our needs and level of official development assistance, is damaging, and must be discouraged. We have found ourselves in this so-called middle-income country trap. Small islands such as St. Kitts and Nevis cannot be fairly compared to countries with infinitely larger economies of scale. We sometimes overlook the fact that many Caribbean SIDS already live on the front line of pockets of poverty, pollution, natural disasters and degradation of coastlines, tropical forests and coral reefs. A natural disaster can wipe out any GDP growth in a matter of hours.”

The Prime Minister reiterated St. Kitts and Nevis’ long-held position in stressing that small island developing states, especially with populations of less than 200,000 people, should be granted access to concessionary sources of finance, even if their gross income exceeds GDP eligibility ceilings.

“The effects of climate change are yet another challenge, and unfortunately, an indelible part of life on small island developing states,” the Prime Minister said lending his supporting for the “commendable commitments” to maintain greenhouse emissions at 1.5º above pre-industrial levels. He also urged the EU and LAC states to support the Caribbean in its ongoing efforts to contribute to reducing its emissions of greenhouse gases and capacity building to enable small islands to adapt and mitigate the impacts of climate change.

The Prime Minister was accompanied to the EU-CELAC summit by Mr. Ozbert DeSuza, Permanent Secretary in the Prime Minister’s office, Dr. David Doyle, Ambassador of St. Kitts and Nevis to UNESCO, Paris, and Mr. Eustace Wallace, second secretary to the Eastern Caribbean Embassy in Brussels.

Prior to the EU-CELAC Summit, Prime Minister Harris participated in a caucus of CARICOM heads of state in Brussels to align their positions ahead of the event. Several points were discussed, in particular, the ongoing human rights issue involving Haiti and Dominican Republic, the “deficit” in implementing many of the EU-funded projects on the ground in the Caribbean, the lack of progress in putting in place the EU-initiated EPA (economic partnership agreements) in relation to free movement of people especially cultural service providers from the Caribbean seeking access to the EU, and the boundary dispute between Venezuela and Guyana.