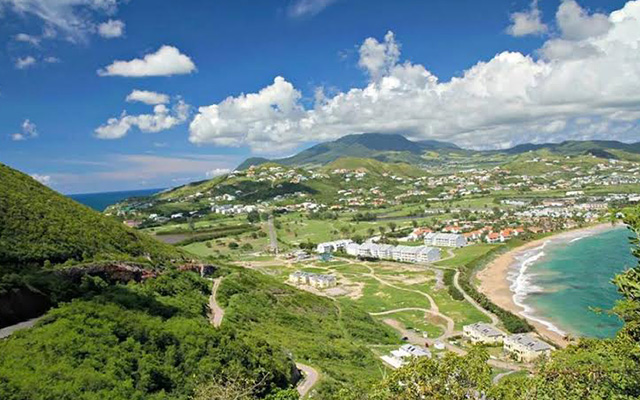 Basseterre, St. Kitts (CUOPM) — The economy of St. Kitts and Nevis rebounded in 2013 recording positive growth of 3.8% and is projected to grow to 4.6 percent in 2014, as a result of as a result of the carefully crafted economic, fiscal and structural reform policies of the Labour Administration, Prime Minister and Minister of Finance, the Rt. Hon. Dr. Denzil L. Douglas said Tuesday.

He disclosed too that the Federation attracted US$112 million in Foreign Direct Investment (FDI) and leads the Caribbean recording US$2,090 per capita in FDI inflows.

“In its Ninth and Final Review of the Stand-By Arrangement the IMF stated: ‘St. Kitts and Nevis has made substantial strides under its home-grown economic programme…Despite the challenges, significant reforms were implemented and considerable progress was achieved.’ The Report went on to highlight that the economic performance was as a result of ‘….robust labour market developments fuelled by the People Employment Programme (PEP), and stronger construction performance related to both Citizenship By Investment (CBI) inflows and a substantial increase in public sector capital spending,’ said Prime Minister Douglas.

He said the momentum of growth has continued into 2014 as preliminary estimates have indicated that as of June the Gross Domestic Product (GDP) has increased by 4.4%. In addition, by all reports there are positive signs that the economy will achieve a growth rate of 4.6% by the end of the year due to expansions in the manufacturing, construction, wholesale and retail, tourism and, transport, storage and communications sectors.

“Clear, decisive actions have resulted in the rebound and maintenance of buoyancy in the economy as creative and innovative initiatives have facilitated the stimulation of economic activity in key sectors, as well as increased employment and increased income generation. This has allowed St. Kitts and Nevis to emerge stronger, pioneering new approaches which are now being emulated by other nations within and beyond the Caribbean.

“Our efforts continue to be lauded the world over by reputable organizations. During the past few months the United Nations Economic Commission for Latin America and the Caribbean (ECLAC) in its 2014 report identified St. Kitts and Nevis as the fastest growing economy in the OECS and the fifth fastest growing economy among the sixteen (16) Caribbean nations analysed. This organization also highlighted the Federation as a leader in the Caribbean in regards to attracting Foreign Direct Investment (FDI) which increased in 2013 by 19.0% totalling US$112 million when compared to US$94 million in 2012. St. Kitts and Nevis also leads the Caribbean recording US$2,090 per capita in FDI inflows,” said Prime Minister Douglas.

“This outturn was as a result of the stabilization in domestic prices and the lower international import prices due to lower fuel prices. As at June 2014, the inflation rate was recorded at 0.4% and is expected to remain low for 2014. My Government continues to be vigilant in regards to the monitoring of prices in the local market place,” said Dr. Douglas.

He noted that as a result of past observations, “we have implemented various strategies designed to keep prices at reasonable levels. Numerous basic food items and medications for chronic non-communicable diseases (NCDs) have been kept either VAT exempt or zero rated, and concessions have been provided to businesses to lower start-up and operating costs.”

“As a net import country it is understandable that the Current Account deficit would widen as the economy expands. During 2014, in line with increased economic activity, the Current Account recorded a deficit of $181.6 million, an increase from EC$132.1 million or 37.5%. This can be attributed to an increase in the importation of capital and intermediate goods to facilitate economic activity particularly in the tourism and construction sectors. The surplus on the Services account is expected to increase by 5.2% to EC$355.4 million or 16.2% of GDP as a result of a projected increase in net travel receipts as the tourism sector continues to record an increase in stay over arrivals,” said Prime Minister Douglas.

He said that preliminary estimates indicate an overall surplus on the external account of EC$168.6 million or 7.8% of GDP in 2014.

“This performance was due to a sizable surplus on the Capital and Financial Account which increased by 43.6% to EC$417.3 million or 19.0% of GDP. This reflects the impact of significant FDI inflows related to the Citizenship by Investment Programme. The surplus on the Capital and Financial Account continues to be sufficient to offset the Current Account deficit of EC$181.6 million or 8.3% of GDP,” said Prime Minister Douglas, who noted that the United States continues to be the main trading partner, “accounting for approximately 63.5% of our total imports followed by Trinidad and Tobago and the United Kingdom which accounted for 4.7% and 2.8% of total imports respectively.”