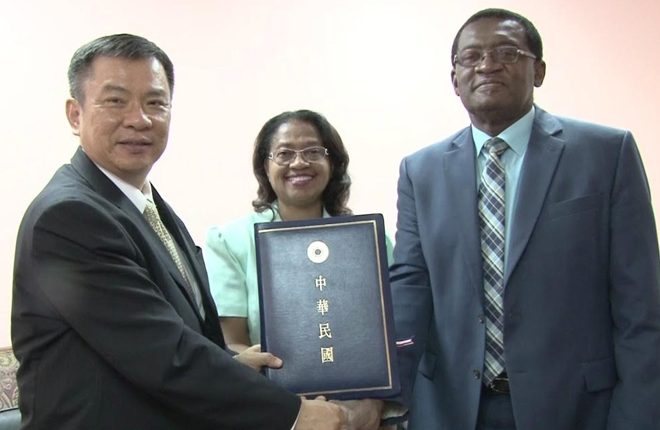 (SKNIS): Residents of St. Kitts and Nevis at risk from renal (kidney) failure will be in a better position to avoid getting the disease come April 2017, when a Renal Failure Disease Control and Prevention Project is expected to commence.

The project is an outcome of the signing of a Cooperation Agreement in Public Health and Medical Skills between St. Kitts and Nevis and the Republic of China (Taiwan) on Wednesday (January 11). Minister of Health, Honourable Eugene Hamilton, signed the agreement on behalf of the Federal Government while Taiwan’s Resident Ambassador, His Excellency George Gow Wei Chiou, signed on behalf of his country at a brief ceremony at Government Headquarters.

Minister Hamilton applauded Taiwan for its ongoing support in numerous areas including the health sector, which over the years has resulted in donations of various health machinery and equipment, ambulances, and the establishment of a hospital management information system to name a few. He said incidences of renal complications have grown from virtually zero to more than 100 cases over the past 10 to 15 years and this is a cause for concern among health authorities.

“I urge everyone in the country who attends our clinics in the various districts to enquire about the testing that they could do to identify whether they are at risk, so as to reduce the incidents of chronic renal failure,” the minister stated.

“I am excited by the scope of this cooperation because it involves training of our health professionals and in this regard we will be able to improve the quality of care and quality of the services that we offer to our patients in St. Kitts and Nevis,” Dr. Laws said, noting that in addition to renal education and primary prevention, other chronic diseases such as hypertension and diabetes will also be covered.

Ambassador Chiou said Taiwan was grateful for the opportunity to expand its assistance in healthcare to the twin-island federation.

“This is a new era between St. Kitts and Nevis and also Taiwan to conduct the new and comprehensive medical and public health cooperation,” he stated. “… Taiwan will not only provide the medical facility equipment and also the personnel [exchange but] we also will cooperate with the government of St. Kitts and Nevis to conduct the control and the prevention education.”

The diplomat added that this would help to decrease the total cost being spent to treat patients with kidney failure and allow the funds to be channeled to other areas of national development. Minister Hamilton revealed that haemodialysis treatment – which is a process of purifying the blood of a person whose kidneys are not working normally – can be very costly, sometimes running a patient more than $100,000 per year.

The Renal Failure Disease Control and Prevention Project is expected to run for three years.