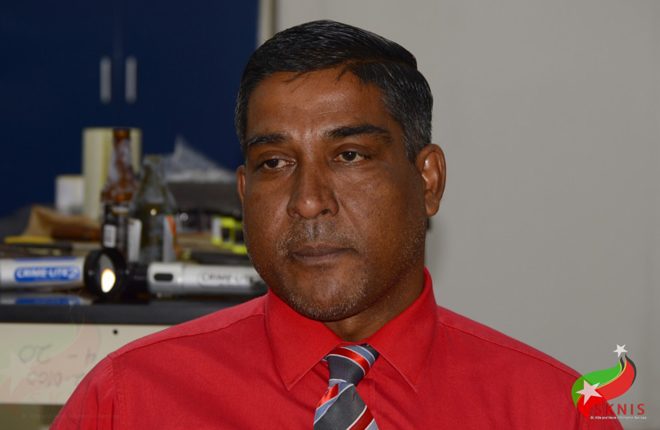 (SKNIS): The new home of the police forensic department in St. Kitts and Nevis stands as confirmation of the commitment to ensure that local law enforcement is given the best tools in the execution of its duties.

The two-storey building under construction in Tabernacle is almost complete and will feature state-of-the-art equipment that will allow the forensic staff to strengthen police investigations by incriminating or eliminating persons of interest when evidence is collected.

“This will be a fantastic facility,” said David Goodwin, a fingerprint expert based in the United Kingdom. Mr. Goodwin is in St. Kitts conducting advanced training at the forensic lab with the men and women of the department. He credited the designers of the building for their vision in putting it together.

“It is a vision to take the core components of what this facility is made of and to turn it into something that is fit for purpose; and it’s really, really good to work in,” Mr. Goodwin noted.

Head of the RSCNPF Forensic Department, Narace Ramnarine, played an integral part in the design. It was based on a similar structure that he saw in Trinidad during his 26 year career in law enforcement there. Improvements were made to the design to allow for greater workflow and efficiency.

“This is a world-class facility,” Mr. Ramnarine stated, noting that when completed, it will be among the best forensic labs in the Caribbean region.

The skills of the men and women of the forensic department are also being upgraded with an ambitious training programme focusing on areas such as Foundation Fingerprint, Crime Scene Investigation Certification and Refresher, and Forensic Laboratory Officer. Officers from other units within the Royal St. Christopher and Nevis Police Force (RSCNPF) have also been trained in basic areas such as Crime Scene Management for First Responders.

Additionally, government has purchased state-of-the-art equipment that will ensure the laboratory features all the necessary tools.

“We have some equipment here that other islands in the world would only dream to acquire and we have been able to acquire them through the blessings of the government and the commitment of the High Command [of the police force] and the police service,” Mr. Ramnarine stated.

At a press conference on Friday (April 13), Deputy Commissioner of Police, Hilroy Brandy noted that the new home of the forensic department is expected to be commissioned on April 27, 2018.