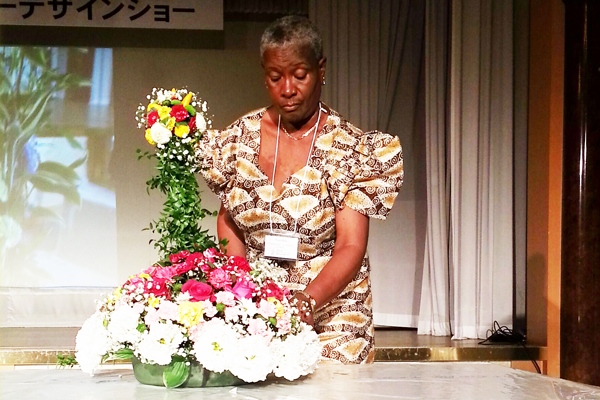 Basseterre St. Kitts – St Kitts and Nevis was represented at the 30th Anniversary of the World Flower Council International Summit convened in Sapporo, Hokkaido, Japan, on September 5, 6, 7, and 8, 2013 by Puretta Wilkin, Dulcie Richardson and Sephlin Lawrence. 150 World Flower Council members and 300 of flower lovers from the Japanese Prefecture of Hokkaido and its Capital City, Sapporo, welcomed florists from 21 countries.

Puretta also designed on the International design show. The theme of the Summit for 2013 was “Message to the Future”, and each country attempted to present in their floral designs their own interpretation of the theme. Mrs Wilkin and the St Kitts and Nevis team used Global Warming/Climate Change to send a message to the future in the hope for a more pleasant environment, cooler climates, purer air, less floods and hurricanes, and a healthier, happier world. The St.Kitts-Nevis Team design and arrangement was therefore an attempt to show a half globe with cool flowers at the bottom (white on green foliage), and gradually moving up to warmer colours (light pink, hot pink), then to hot colours (crimson and red), demonstrating a world which is getter warmer and warmer. There was a smaller globe on the top not touching the main one, to represent the distant future. The colours in the smaller globe represented what the team envisaged as the future: green for life and peace; white for purity, cleanliness and new
beginnings; gold for prosperity and wisdom; yellow for happiness; and red for excitement and action.

Sephlin Lawrence of the St. Kitts- Nevis Chapter also attended the Summit and enjoyed the pre-tour.

The 30th Annual World Flower Council Summit was one of our most spectacular Summits, with videos, music, dancers, performers and designers with top talent from all over the world.

The Gala evening was action packed, stylish and smart and featured a translated floral book by

Artist/Teacher, Mrs. Alisa A. de Jong-Stout of Northern California, with her book of floral expertise, A Master Guide to the Art of Floral Design, with Chapter 1 and the Introduction translated from English to Japanese by Mr. Makino Mitsunobu of Tokyo University.

The finale of the event was the presentation of the prestigious Floral Laureate of Floral Philanthropy to Mr. Herman Meinders, co-founder of World Flower Council. He is the most celebrated and also the most renowned philanthropist of the floral industry. Mr. Meinders is from Oklahoma City, OK. Following the World Flower Council Summit, a post-tour convened in Hiroshima, Japan and to Hiroshima Museum on the grounds of the domed city building, totally destroyed by the atomic blast on August 6, 1945. Mrs. Keiko Ogura, the young survivor of the holocaust, who was eight years old at the time, gave an informative and inspiring lecture in the museum lecture room.

From Hiroshima we traveled to Miyajima and the large Tori Gate Park and grounds for a delightful tour.

The group traveled the next day by Bullet Train to Kyoto, the former capital of Japan. Kyoto is the famed city of Shogun days and the vast temples and palace type estates of the Shogun to Zen Period.

The Last Samurai, Joe Okada, 84 year old licensed English speaking tour guide and a friend of Dean White, our International Chairman Emeritus, performed his “Cool Kyoto Walking Tour” where he performs his unique skill of cutting an apple in the air. He is now featured as one of the leading “Seniors in Japan” magazine, and still working! (Photo attached).

Travel then included Nara and the largest bronze Buddha in the world and to Kamakura to the second largest bronze Buddha. Stops were enjoyed at the base of Mt. Fuji with 5 a.m. views of one of the world’s most famous mountains. Then it was on to Tokyo, for tours of century old Bonsai trees and Bonsai Museum and then experienced the typhoon of Japan with torrents of rain and very high winds destroying villages and many houses, then on to the airport for a delayed flight to Los Angeles and eventually returning home.

The trip of a lifetime was enjoyed by 35 travelers from the U.S., Canada, Russia, St. Kitts-Nevis, Singapore, Vietnam and Japan. WHAT A TREAT!

St. Kitts and Nevis Government to Take Actions to Create a Sustainable Medicinal…