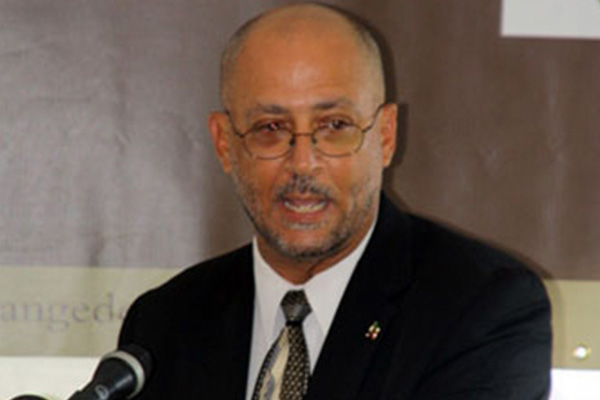 Basseterre, St. Kitts (CUOPM) – The Federation’s Minister of Tourism, Sen. the Hon. Richard “Ricky” Skerritt is among the list of the Caribbean’s 25 Most Interesting People in 2013.

Minister Skerritt, who was appointed to the Cabinet of St. Kitts and Nevis’ Prime Minister, the Right Hon. Dr. Denzil L. Douglas, in October 2004, is regarded by Caribbean Journal, “as one of the newsmakers who made a difference in 2013.”

“Whether you like what they’re doing or you don’t — you’re probably talking about them, and that makes their stories fascinating,” said the Miami, Florida-based Caribbean Journal, founded in 2011 with one vision: to provide news, commentary and analysis in a way that the Caribbean had not yet seen.

“You may not be aware of it, but the tiny twin-island Federation of St. Kitts and Nevis is in the midst of a hotel construction boom. And at the centre of it is Tourism Minister Ricky Skerritt, who is helping to draw a new wave of foreign investment to the smallest sovereign state in the Western Hemisphere, from a Park Hyatt resort to a series of condo-hotel properties,” the Caribbean Journal wrote.

According to Caribbean Journal: Ralph Gonsalves, the St. Vincent and the Grenadines Prime Minister, has become perhaps the official spokesperson for the Caribbean region — from taking on the United Nations on the cholera issue to strong criticism of the Dominican Republic’s controversial citizenship ruling. St. Vincent isn’t a large country, and yet, Gonsalves continues to be heard.

Gregor Nassief, a native of Dominica, is among the most innovative hoteliers in the Caribbean — helping transform the Fort Young Hotel and make the boutique Secret Bay one of the hottest destinations in the region.

Taking on the United Nations is no small feat, but Haiti’s Mario Joseph is up to the challenge. Joseph, who has become one of the region’s leading human rights lawyers, is leading the lawsuit against the UN for its role in bringing cholera to Haiti.

The Caribbean’s sea turtles are critically endangered. And on one of the Caribbean’s smallest islands, Lemuel Pemberton is working to change that. The Nevis native has created a culture of conservation on Nevis, regularly drawing crowds to his evening turtle walks, with help from the Sea Turtle Conservancy and the Four Seasons Resort. The creatures had few friends in the region like him — and, in time, he will help to change their plight.

Usain Bolt: You can’t really make a list like this without including Bolt, perhaps the greatest sprinter of all time. Bolt continues to create headlines with his track and field prowess, and even more with his marketing acumen. Right now, he’s the closest thing the Caribbean has to a brand ambassador.

Adam Stewart: The Sandals CEO has helped lead a significant expansion for the company in the region, from Grenada to Barbados. And he also created a rather clever response to the now famous Volkswagen Super Bowl ad earlier this year. Stewart is a young, dynamic leader in Caribbean tourism — how Sandals continues its regional expansion will be fascinating to follow.

Rihanna: Like Bolt, Rihanna has become synonymous with the Caribbean. The Bajan superstar continues to be at the centre of most music industry conversations, whether you like her music or you don’t. And she continues to market Barbados tourism.

Peter Phillips: Jamaica’s Finance Minister almost single-handedly negotiated what may be the most crucial economic agreement Jamaica has signed in a generation. The jury’s still out on whether Jamaica can implement it (and whether it will save a stagnant economy), but Phillips remains crucial to the country’s near and long-term plans.

Shelly-Ann Fraser Pryce: While her countryman, Usain Bolt, gets much of the attention, Jamaica’s Shelly-Ann Fraser-Pryce remains the world’s greatest female track and field athlete, following another spectacular summer in the Diamond League. And for a country suffering from a doping scandal, the clean Fraser Pryce is a breath of fresh air.

Tessanne Chin: CJ’s Artist of the Year made headlines earlier this month in winning the NBC show “The Voice,” uniting the Caribbean in a way largely unseen before. Chin was another reminder of the evergreen power of “Brand Jamaica,” and of the region’s talent for punching far above its weight.

Gary Foss: Will Seaborne Airlines be the Caribbean’s next great regional airline? It may not have seemed possible a few weeks ago, but with the company’s move to San Juan, anything is possible. And for a region facing a continual airlift challenge, Seaborne’s move could prove crucial, and Foss, Seaborne’s President and CEO, will be a major part of it.

Ingrid Riley: One of the Caribbean’s best-known entrepreneurs, the Jamaican native is trying to help connect the region’s information and technology sector — and doing a rather good job of it. ICT is a major prong of the region’s push to diversify its economy beyond tourism — and the kind of awareness Riley is promoting will go a long way toward improving

Andrew Holness: He was briefly Jamaica’s Prime Minister in 2011, and remains one of his country’s most articulate and press-savvy advocates internationally (and, some would argue better than current Prime Minister Portia Simpson Miller).. After surviving a hard-fought party leadership challenge from former Finance Minister Audley Shaw, Holness proved that he’s a pretty tough politician, too.

John de Jongh: The US Virgin Islands Governor is working to steer the US territory through perhaps its most serious crisis ever — the closure of the HOVENSA refinery last year. Whether he can succeed remains a question, but de Jongh has been fearless and outspoken in his advocacy for the islands.

Caribbean Journal is said to be the Caribbean’s leading digital newspaper, with 24/7, original content covering news, travel, politics and opinion from more than 20 countries and territories.

Caribbean Journal says its Travel section is the premier source for Caribbean travel and trade news — from the latest hotel openings to secret vacation escapes.