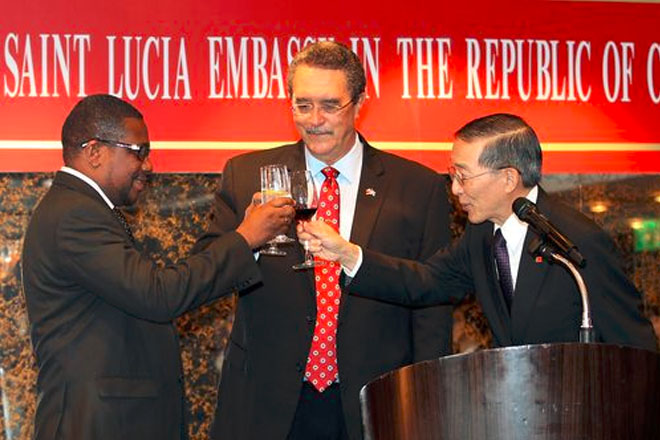 St. Lucia government under more pressure to tell all about Taiwan embassy

Castries, St. Lucia — The main opposition party is demanding answers surrounding “the mysteries” surrounding the opening of an embassy in Taiwan last week.

St. Lucia’s embassy in Taiwan, the Caribbean country’s first in Asia, was opened last Tuesday in an effort to strengthen bilateral ties, the government said.

Taiwan and St. Lucia have maintained close cooperation in public health, education, infrastructure and culture since the two countries resumed diplomatic relations in 2007.

But the United Workers Party (UWP) said in a statement that the Dr. Kenny Anthony government had not seen it fit to provide the answer to several questions every St Lucian needed.

“It is about time that all citizens of this country know who is the appointed Ambassador to the Republic of China on Taiwan. It is also about time that the citizens know what it will cost us annually for this new decision,” it said.

“Such important details and decisions are taken by this SLP [St. Lucia Labour Party] government and kept well away from the official Opposition in the Parliament of St. Lucia, and from the people of this country at a time when cries of shortages of basic of medical supplies are being reported among other things. On behalf of the people of St. Lucia, we demand answers!”

The UWP is not the only opposition party to ask questions about the embassy.

Earlier this month, the Lucian People’s Movement (LPM), which described the move as “baffling” and called for public disclosure on the costs associated with the opening.

St. Lucia’s Minister for External Affairs, International Trade and Civil Aviation Alva Baptiste said at the opening ceremony that the embassy would be tasked with promoting foreign investment in St. Lucia, Baptiste said.

He said the government was in the process of appointing an ambassador, who will arrive in Taiwan “soon”, but he did not disclose a name or date of the individual’s arrival.