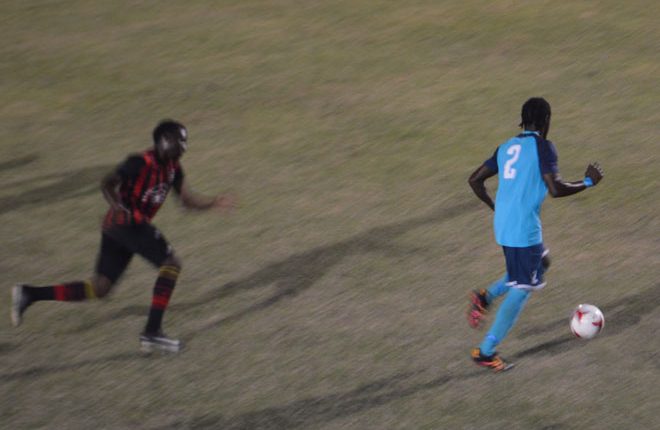 It was a heart breaking loss for the defending champions Flow 4G Cayon Rockets F.C. after losing 1-0, conceding in the dying moments of their National Bank Premier league match against S.L. Horsfords St. Pauls United on Tuesday night at the Warner Park. Cayon’s captain Clyde Mitcham scored an own goal in the 90th minute of the game, despite dominating for good portions of the match. They even played the last few minutes against 10 men after Omar Francis was sent off in the 88th minute from a red card. Still Cayon could not find the back of the net, earning their first loss of the season.

In Tuesday night’s other match Fast Cash Saddlers United snipped St. Thomas/Trinity United 1-0 in a match that continued from Saturday after rain affected play. Niquan Phipps scored the lone goal in the 60th minute. Jael Gumbs of St. Thomas/Trinity United was sent off in the second half after picking up his second yellow card. Coach Kenroy Knibbs of Saddlers, while not happy with the performance, was glad to pick up three points. “We didn’t really play to our real game plan but we won the game and in football terms you always say that an ugly win is still better than a loss,” he said after the match.

Coach Lonzo Wilkinson of St. Thomas/Trinity United, felt his players were not communicating with each other, especially after the goal was scored against them. “System of play broke down and communication and I think that cost us the game. After the goal scored, players stopped communicating and (did) not follow the game plan,” Coach Wilkinson said. To better perform on the pitch, Wilkinson believes the players should begin respecting their teammates, the decision of the referees and the coaches. “They are trying to do everything instead of playing their part,” bemoaned Coach Wilkinson.

The National Bank Premier League continues this weekend with the following matches:

Meanwhile, matches continued in Division 1 football on the weekend with Hard Times defeating Trafalgar Southstars 2-0. Sean Hanley scored in the 14th minute and Sheldon Browne netted in the second half (51st minute). The match was played at the Bath Playing Field. In the day’s other encounter Rivers of Living Waters drew 2-2 with Security Forces. Nevone Tweede and Evansley Fahie scored for Rivers in the 33rd and 71st minute respectively while Randy Mundell did it all for Security Forces scoring both goals in the 65th and 79th minute. Leon Mc Alister of Security Forces was sent off with a straight red card in the 77th minute.