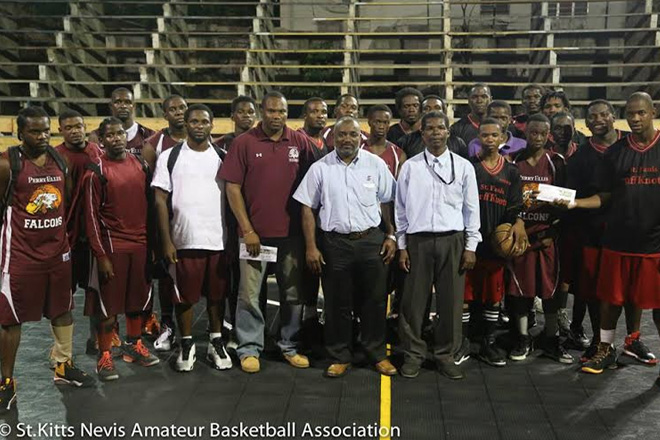 Basseterre, St. Kitts — The St.Pauls Tuff Knots continues to show that they are the team to beat in this year 2015 SKNABA National Basketball League. The Former SKNABA National Champions and the undefeated 2014 “A” Division champs easily swept through the inaugural Charles Morton Knockout Tournament at Basketball City on Friday evening.

A large crowd turned up at Basketball City to give support to one of the 14 Teams from across all the senior divisions including the Premier and “A” Divisions took part in the One Night Knock-Out Tourney. St. Pauls overcame 3 teams including the SANDY Point Fruta Falcons who they met in the finals.
The St. Pauls was once again led by their Big Man Nosharn Maynard who was easily the best player for the tournament and dominated the boards along with Brother Noren Maynard who dominated the paint and Clayton Powell who ran circles around the Falcons backcourt defenders.

Mr Charles Morton was on hand to present the Cash Prizes to the two finalist team. The St. Pauls Tuff Knots received $1000 while the Sandy Point Fruta Falcons copped $500.
Mr Morton expressed his appreciation to the SKNABA for the recognition and expressed his desire and willingness to continue to provide support and guidance to the SKNABA and all its teams and players whenever and wherever is appropriate.

Buoyed by the success of the tournament the SKNABA has announced that similarm tournaments will be held during the course of the season.