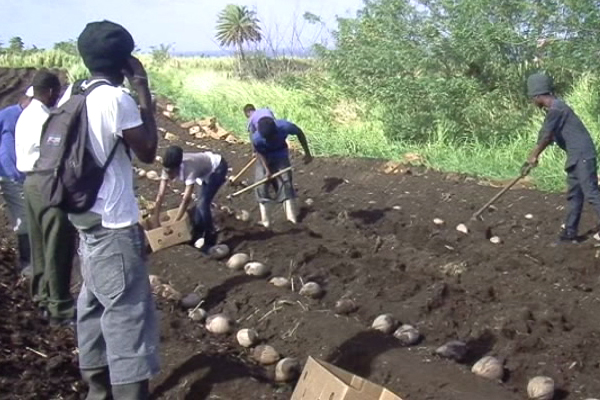 (ZIZ News) — The Ministry of Agriculture in St. Vincent and the Grenadines has provided more than 3000 seeds of the short, early-bearing coconut trees, free of cost, to the Government of St. Kitts-Nevis.

The Ministry of Agriculture in St. Kitts received a 20-foot container with the coconut seeds that are more tolerant to pests and diseases.

This comes after St. Kitts’ Minister of Agriculture, the Honourable Nigel Carty, requested the support from the Government of St. Vincent and the Grenadines.

Permanent Secretary in the Ministry of Agriculture, Ashton Stanley said in 2012, the majority of the island’s coconut palms were significantly damaged mainly by three diseases.

“We would basically be reminded that the coconut palms in St. Kitts and Nevis have been affected by what we refer to as a coconut palm complex involving basically three different diseases; bud rot, lethal yellowing and the red palm mite,” he said.

He said while the government is extremely grateful for the generous donation, a greater effort is needed to help revive the coconut industry.

“We have targeted a short bearing variety that seems to be tolerant to these diseases and we had imported, sometime last year, some 3,000 nuts,” Stanley told ZIZ News.

“This number might seem significant but when we begin to plant out we would realise that this number is in fact very small since it was over 85 percent of the coconut palms in St. Kitts and Nevis that have been destroyed by this complex,” he continued.

Stanley also outlined why it was important for the Government to undertake this national response to the loss of the coconut palm.

“We have sought to bring the coconut palm back, not only for its environmental appeal but also because it provides a livelihood and this is what is critically important for us. Providing livelihood in terms of the coconut water and the nut that is provided to make all sorts of confectioneries and even our famous coconut dumpling.”

The overall plan for St. Kitts is to plant the seedlings on more than 300 acres of agricultural lands, already allocated around the island, as well as a concept proposal for a coconut park.

Additionally, a zone of three to five acres will be identified and developed into a coconut nursery.