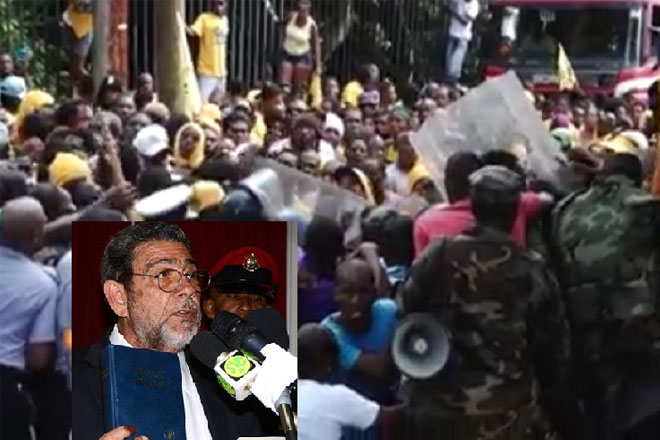 St. Vincent PM sworn in after opposition protests cause riot police to be called out

Riot police had to be called out as the NDP demonstrators tried to prevent Gonsalves from taking the oath of office for a fourth consecutive time.

Declaring there had been fraud and irregularities during the vote, and insisting that Gonsalves should not be sworn in before a recount in the Central Leeward constituency and other disputed constituencies had been completed, the

NDP insisted it would not accept the results which gave it seven of the 15 seats in Parliament and the ULP the other eight – the result as in the 2010 elections.

The NDP supporters and police scuffled and there was even a face to face confrontation involving Sir Louis Straker, who won the Central Leeward seat by 314 votes, and ULP leader Arnhim Eustace, as tensions ran high.

The protestors’ refusal to clear the street prevented Gonsalves from taking the oath at the scheduled 2 p.m.

However, by 7 p.m. the swearing-in ceremony at which Sir Louis also took the oath of office as deputy prime minister and Judith Jones-Morgan was sworn in as Attorney General, got underway.

“I’m sorry I’m late . . . I ought to have been here a little earlier, but I was unfortunately delayed,” Gonsalves quipped as he arrived for the ceremony, later adding that “some people just do not want to accept the results of a free and fair election”.

He later told those in attendance that he intended to serve out the next five years as prime minister “unless the people in some national conversation” say otherwise.

“Part of my . . . political obligation in this period is to manage the transition to the next generation of leaders,” Gonsalves added.

He is expected to name the rest of his Cabinet this weekend.