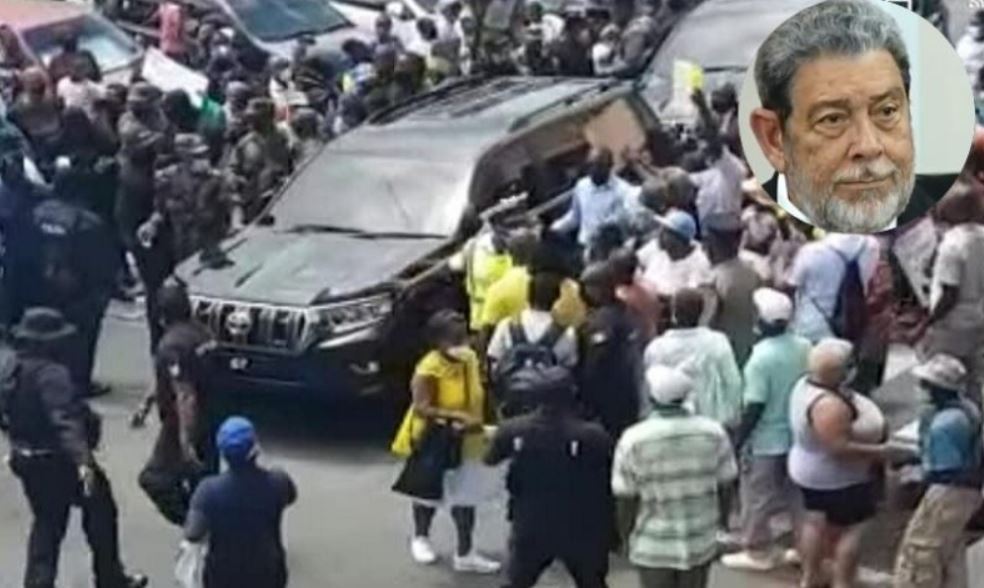 St. Vincent’s PM Says He Will Not Be Intimidated By Anyone

Prime Minister of St Vincent and the Grenadines Ralph Gonsalves, speaking in parliament last week, said, he would not be intimidated by anyone.

Gonsalves was referring to protest action outside of parliament on Tuesday and Thursday last week, in which his official vehicle was a target.

“What I can tell you Madam Speaker, is that when I left here on Tuesday, I drove through, a small group of people. It wasn’t just that person’s pounded on the vehicle. Somebody threw water bottles, one of them was thrown on the windscreen. I wasn’t sure what it was until I was told afterward. I wasn’t going to let that intimidate me, not at my stage in life.”

Gonsalves said that since the Haitian President’s death, some elements associated with the opposition, have become emboldened.

“There are persons associated with the organization, which the NDP got into bed with in the protests, who have been posting things online, referring to me, saying that they want a couple of those Haitians who did the killing in Haiti to deal with the dictator in St Vincent, in various forms.”

“Madame Speaker, when I was on Star Radio Wednesday afternoon, a text message came in. What was in the message was what was said by a person from Mespo inside the NDP. Who said that what happened in Haiti happens to people who want to hold on to power too long. In other words, it’s perfectly okay”.

“I said this person has the facts wrong because the Haitian president was there just for one term, and of course, he’s ruling by decree with all the confusion to the next election.”

Gonsalves said that the person in question, who is a woman, may not like him, but he wants her to know that he loves her very much even though they may disagree on this issue of promoting violence.

“There are members of my family who are concerned about me leaving to come to the parliament because of what has been said on Facebook and the Internet, and what intelligence was also picked up by the police and transmitted to me.”

Gonsalves said his simple answer was, “nobody intimidates me, and I’m okay.”

The leader of St Vincent’s main opposition Party, Godwin Friday speaking in parliament last week, said, the party has distanced itself from what Prime Minister Ralph Gonsalves said were suggestions by party supporters.

“That is an abhorrent act; it is not one  that the New Democratic Party condones, advocates, or sees in any way as a model for guidance in any actions here or anywhere in the Caribbean or elsewhere.”

Haiti’s President Jovenel Moïse was assassinated by armed assailants who stormed his private residence in Port-au-Prince on 7 July.

According to Haitian police, a group of 28 foreign mercenaries, including retired Colombian soldiers, assassinated the President.

On Monday, 12 July, the Haiti national police chief indicated that he believes a Florida-based doctor, Christian Emmanuel Sanon, was plotting to assume the presidency.

The U.S. has dispatched a team to assist in the investigation.