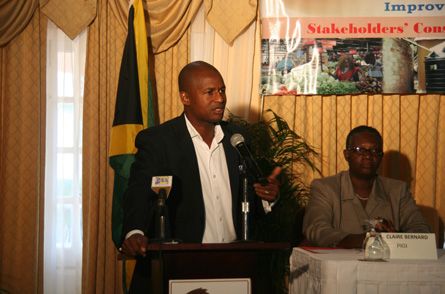 Kingston, Jamaica – Climate Change is no longer considered an emerging threat, but is now one of the greatest threats to the future of civilization, says Minister of State in the Ministry of Water, Land, Environment and Climate Change, Ian Hayles.

“This phenomenon has put ever increasing pressure on the world’s vulnerable communities, and is especially a threat to small developing island states, such as Jamaica,” he added.

The state minister was delivering the keynote address at a Planning Institute of Jamaica (PIOJ) National Stakeholders’ Consultation for the GOJ/Adaptation Fund Programme, held at the Cardiff Hotel and Spa, in Runaway Bay, St Ann, on October 30.

Representatives from several government and non-government entities were in attendance.

The adaptation fund was established under the Kyoto Protocol to provide financial resources to developing countries to combat the adverse effects of climate change.

The GOJ adaptation fund programme was launched in November 2012, in the wake of the devastation caused by Hurricane Sandy, with programme activities to last until December 2015. The programme is being funded through a grant of approximately US$9.99 million.

Hayles argued that addressing the issue of climate change is a matter of securing the nation’s future and that of generations to come. He pointed out that it is with that charge in mind why a Climate Change Division has been established in the Ministry, with the sole remit of addressing “the most complex and multifaceted issues posed by what is now considered to be one of the most pressing issues of the 21st Century.”

While noting that support from the adaptation fund programme will allow the country to build on initiatives already underway in key economic sectors, Hayles implored all stakeholders to make the best use of the available funds through the programme. He advised that if the implementation of projects and programmes are not undertaken in a timely and effective manner, the financial support can be withdrawn.