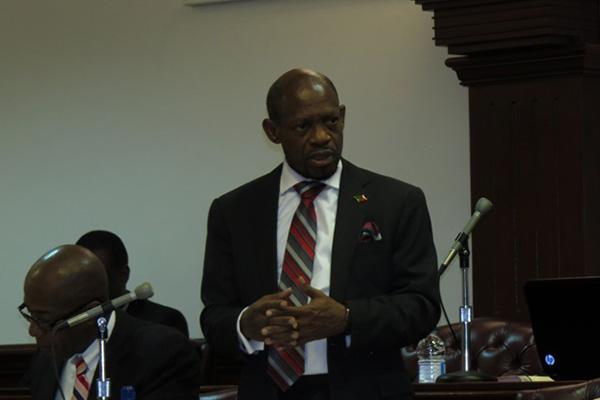 1.     On September 9th, 2013 the National Assembly was convened inter alia, for the purpose of tabling the draft report of the Constituency Boundaries Commission.

2.  On September 9th, 2013 upon an application filed by the Applicants obtained an ex parte injunction against the Respondents. For ease of reference only two of the terms of the Order of the Court which are numbered 1 and 4 respectively are set out below:

(1) A Conservatory Order is granted in the following terms:

(i)                His Excellency the Governor General shall not act or rely on the report of the Constituency Boundaries Commission dated 5th or 6th of September, 2013. whether directly or indirectly

(ii)              and; His Excellency the Governor General shall not make a Proclamation under Section 50(6) of the Constitution of St. Kitts and Nevis

(iii)            This Conservatory Order shall continue until further Oder of this Court.

(4) The Applicants shall file and serve their substantive claim within 48 hours.

c.      The First Claimant has no right under the Constitution or any other law to represent a particular Constituency in the next General Election.

d.     There is no provision in the Constitution which precludes the Commission as established under Section 49 of the Constitution from considering the alleged Preliminary Census Data or any other relevant information in its review of the number and boundaries of the constituencies into which Saint Christopher and Nevis is divided.

e.     The effect of the Order would hinder good Government and is inconsistent with Section 37 of the Constitution.

Application for leave to apply for Judicial Review

4.     On September 11, 2013 the Claimants filed an application for leave for judicial review on the grounds that:

(iii)            The Commission did not hold Consultations with members of the Public.

(iv)            The Commission in consulting with Political Parties did not advise the Parties of the changes it proposed to make.

(v)              The proposed changes would drastically affect the Claimants chances of being returned as Representatives of the Constituencies which they represent and the changes were being made in the effect to give the Labour Party the victory in the upcoming elections.

(vi)           The Commission failed to act in accordance with the principles of natural justice and acted in a manner that was procedurally unfair, irrational, unreasonable and arbitrary.

(6) On September 27, 2013, the matter was heard and on November 25th 2013, the Court granted an order directed to the Hon. Attorney General in his capacity as representative of the Governor General restraining the Governor General by himself his agents or servants from making any proclamation in terms of the draft submitted under section 50 of the constitution until the hearing and determination of this action or until further order of the Court. The effect of this Order is to maintain  the injunction previously granted in different terms.

(i) Census Report: There is not sufficient evidence before this Court to show that there is a triable issue or an arguable case that in considering the preliminary census report the Commission acted as an unreasonable Commission. The Court stated that it considered that this Report appears to be what has triggered these entire proceedings. For this reason and for the fact that is the one main aspect of this case that has raised considerable public attention, and appears to have aroused public concern, the Court considered that this is a compelling reason to grant the applicants leave to proceed with this ground in their application for judicial review.

(ii) Consultations: The Court stated that there is no constitutional or statutory duty imposed on the Commission to consult with anyone during their deliberations. However, having regard to the circumstances of this case, it is arguable that, having regard to the fact that the Commission had embarked on a process of consultations, there was a legitimate expectation that they would conduct the process fairly and properly. Further, it was arguable that once the Commission had embarked on that consultation process, conspicuous unfairness might result if the Commission failed to conduct that process fairly and properly.

(iii) Bias: One of the issues raised on the Complaint was that the Chairman of the Commission was affected by bias, and as such the decision of the Commission was thereby affected. In approaching this issue the Court considered that it was significant to note the Chairman was appointed in accordance with a strict constitutional process… Evidence that the Chairman was an executive member of the ruling part, was engaged in commercial contracts with the government etc did not present an arguable case that he was clothed with actual bias. However, having regard to the test of the fair minded and informed observed, there is an arguable case that there may be the perception of bias.

(iv) Improper Motive: The Court stated that “…allegations that a statutory or constitutional body such as the Commission has acted for improper purpose are grave and they must not be treated as a synonym for an honest but mistaken reliance on a factor that is in law irrelevant or even on evidence that might show a perception of bias. In this case the applicants argue that having regard to the effect which decision of the Commission is likely to have, an inference can be drawn that the Commission acted for the improper purpose of disadvantaging members of the Assembly opposed to the Prime Minister. There is no arguable case of actual bias. Equally the evidence does not disclose an arguable case of improper purposes. It is therefore not proper to allow the applicants to proceed with this a ground for judicial review when they seek to ground it in an inference to be drawn from evidence that might equally be open to other inferences.”