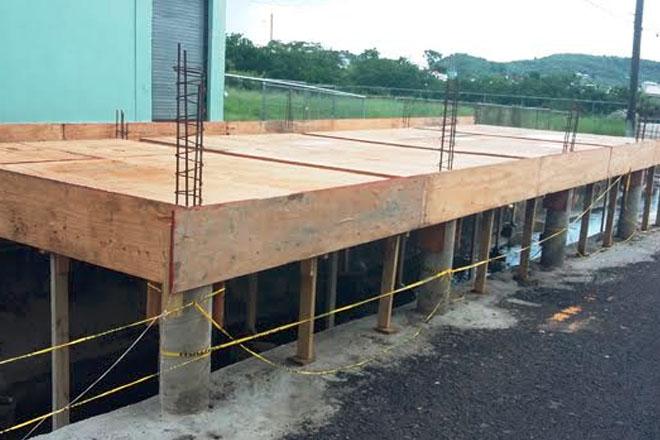 (Antigua Observer) St. Johns, Antigua – Mystery surrounds the start of a structure purported to be a bar and restaurant which sits atop the gutter on lower Tanner Street.

The wooden structure, which was erected on concrete piles, appeared approximately three weeks ago.

A resident, who saw the construction in its initial stages, told this newspaper they thought workmen were doing repairs to the gutter.

Chairman of the Development Control Authority DCA Dean Jonas pointed this newspaper to Chief Town and Country Planner Frederick Southwell to provide answers to who exactly owns the proposed facility.

Jonas said a stop order was issued to prevent further construction on the would-be restaurant. He told OBSERVER since then there has been no further movement on the structure.

Several calls to Southwell proved futile as his office said he was in meetings all day.

Some residents have taken to the airwaves to voice their disapproval of the incomplete structure, while others took to social media.

Among those expressing concern was Social Activist Mary John.

“I think someone should be fired, she said, somebody actually approved the structure. The DCA has not been dealing with anything that falls under their purview over the past few years, John charged.

A contributor to social media posted “This is said to be a restaurant being erected over Tanner Street gutter…it is also said to have DCA approval. We might sarcastically ‘understand’ where the sewage will run, but from where will the water supply come?…is it a case of ‘it’s who you know’?,”

Another remarked, “Tanner St was at one time to be a walking street only with vendors over the gutter (not a restaurant) which I thought could work. This is crazy”.