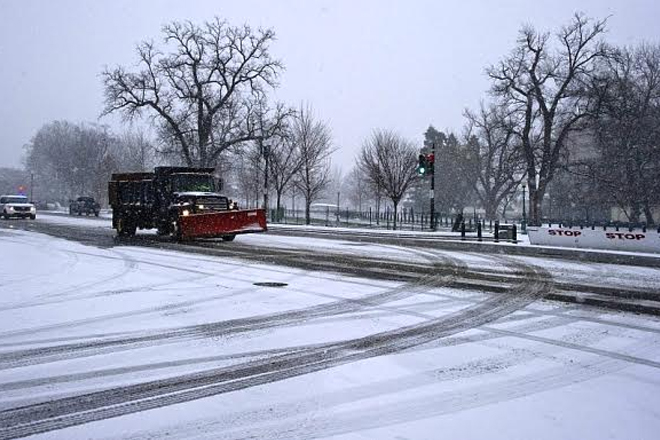 Storm Jonas heading to Britain after Battering US, Killing 19

(The Telegraph) — The massive snow storm which shut down New York and Washington on Saturday and saw 11 states of emergency declared across the region, is reported to be crossing the Atlantic.

Storm Jonas, which claimed at least 19 lives in the US, is heading across the Atlantic, triggering fears of more flooding. Severe weather warnings have been issued by the Met Office for much of Wales, North West England and the West of Scotland.

The Met Office warned of heavy rain and the danger of more flooding.

In the US, the storm wrought havoc on much of the eastern seaboard, bringing major cities to a halt and leading to the cancellation of thousands of flights.

The heavy snow brought Washington DC to a standstill and saw drivers ordered off the roads in New York City and Long Island.

A total of 11 states declared a state of emergency and with winds still battering the coast, there are growing fears that the heavy snow could be followed by flooding. High tides were reported on much of the mid-Atlantic with some people being evacuated from the New Jersey shore.

“You never like to disrupt transportation and commerce, however the storm was fast and furious,” said New York State Governor Andrew Cuomo.

“This is a storm that is nothing to be trifled with,” he added.

In New York Broadway shows were cancelled on the advice of Bill de Blasio, the city’s mayor.

An estimated 85 million people found themselves in the eye of the storm, which was dubbed “Snowzilla”. Around 200,000 people were left without power.

The storm dumped 22.2 inches (56 centimetres) in Washington and 25.1 inches in New York’s Central Park, the third highest accumulation since records began in 1869.

The dead included Jefferson Heavner, a Good Samaritan, who police say was shot by a 27-year-old motorist he had gone to help after his car span off the road.

Aviation was badly hit with thousands of flights, including transatlantic services cancelled. However some flights are expected to resume during the day, although much will depend on whether the snow tapers off and the roads can be cleared to get staff and passengers to major airports.