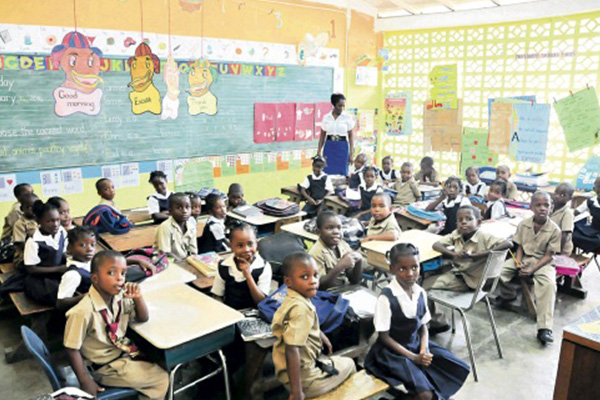 A few years ago, students of Whitehall Primary School in St Thomas were labelled as rowdy and got into almost daily fights, but a staff initiative aimed at rewarding them for doing good deeds is helping to significantly curb behavioural problems and boost academic performance at the rural school.

“When you come to the school you could drop a penny and hear it because of how quiet and orderly the students are,” guidance counsellor Hazel Richardson told the Jamaica Observer North East.

As a spin-off, “It has become less stressful for the teachers and it also increased the academic performance of the students,” she added.

The initiative, which began three years ago as the Peaceful Classroom Competition but which evolved in 2013 into the brand name Classroom Competition, was inspired by a book Richardson read about how to create brands to achieve the best out of life. She thought the concept could be tailored for a school setting.

Through the competition, students and their respective classes receive points for meeting the criteria, chief among which is the daily performance of a good deed. Other criteria require the students to keep their classrooms in pristine conditions and to excel academically.

Prior to 2008, Richardson said, the school did not have a guidance counsellor and this resulted in a number of social issues not being addressed. The nowretired principal Herma McPherson, who served the institution for 30 years, was the one who lobbied for someone to be employed in that role, Richardson said.

“The school was a very noisy place and there were a lot of fights because killings used to take place a lot in the community and so the children were mirroring the violence,” she said.

“Now, because of the good deed (component), if the students find a pencil outside they are taking it to me so they can get a point and their classroom can get a point,” explained current principal Icyline

“We have even had instances where students have lost their

lunch money and they get it back because everyone now wants to do a good deed,” she told the Observer North East.

She explained that students who have performed good deeds are publicly recognised during the school’s devotion which also acts as an incentive.

The grade three students who won the Peaceful Classroom Competition were rewarded with a trip to the Norman Manley International Airport in Kingston where they got the opportunity to tour the cockpit of an aeroplane. Family members were allowed to accompany them. Meanwhile, the grade four students, who came in second, got to tour several places in St Thomas such as the Bath Fountain and the parish library as well as the opportunity to meet with the custos of the parish.

School administrators have implemented another initiative in which students in grades four to six are responsible for taking care of those in grades one to three.

“These little deeds also teach them to do good deeds in their community,” Davis-Taylor said.

The principal said the school’s recent launch of an environment club is further serving as motivation for the students to behave well. Participants in this club are all boys from grades one through to six, and this, she said is a deliberate strategy aimed at getting males more involved.

The teaching of maths, she said, is also being infused in the environment club from grades one to three.

“The reason why it is only boys for the environment club is because I want them to have more impact in the school population, to serve as mentors in classes where maths is concerned, and for them to know they are valued,” she said.

This, she said, is particularly important, given that it is the girls who continue to score in the 80s

Davis-Taylor further explained that it is also important to change the low esteem in which parents hold the school and which has resulted in some residents sending their girls to schools outside the community.

“We have children from the same family where the boy comes here and the girl goes all the way to Seaforth,” she said.

The school has also established an art club and has started teaching music, which, according to the guidance counsellor, also helps some children with behavioural problems.

“We have been using the art work as therapy and this helps to curb behavioural problems,” she said.

The school is also heavily involved in the 4H Club and spends considerable time and resources preparing for annual competitions.

Teacher Tresha Passley-Powers said the school established a chicken rearing project to fund their participation in the competition this year. A parent volunteered to raise 100 chicks which were donated to the school.

“We sold bowls of mixed corn flakes and sweets to raise funds to purchase feed for the chicken for their entire six weeks,” she explained.

The chicken, she said, was later sold to the school’s cafeteria and the money used to purchase materials that the students will be needing to participate in the competition.