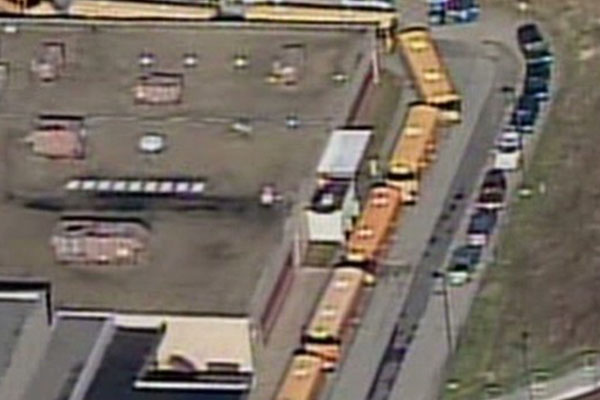 Students rush out of school crying: ‘Get out; run; he has a knife!’

Murrysville, Pennsylvania (CNN) — High schooler Mia Meixner was tending to her locker at the start of her day when a ruckus behind her got her attention.

Two boys were scuffling on the floor. Nothing to worry about, she thought — until she saw one of them lift his shirt, and blood gushed out of his stomach.

He had been stabbed, Meixner said. The other boy ran past her. was like ‘Brady Bunch’

In the next five minutes, police say, the boy went from classroom to classroom at Franklin Regional Senior High School, swinging two kitchen knives. He wounded 20 students and a security officer before the assistant principal tackled him.

“He was very quiet. He just was kind of doing it,” she said. “And he had this, like, look on his face that he was just crazy and he was just running around just stabbing whoever was in his way.”

Police later identified the teen behind Wednesday’s attack as 16-year-old Alex Hribal, and charged him with four counts of attempted homicide, 21 counts of aggravated assault and one count of possession of a weapon on school grounds. They said he’ll be tried as an adult.

He was kind of withdrawn, didn’t have many friends and “kept to himself,” she said.

“I never thought anything bad would happen with him.”

A soundtrack of chaos

Murrysville, with a population of about 20,000, is a quiet middle-class enclave roughly 20 miles east of Pittsburgh on U.S. Route 22.

“We are so small compared to other communities,” said Paula Fisher who left Pittsburgh to move here almost 20 years ago. “I came out here purposely to raise my children in a school district that we felt was safe as well as academically sound.”

Recordings of emergency calls released in the wake of the attack provide a soundtrack of sorts to the terror and chaos that played out inside the school.

“I don’t know what I got going down at school here but I need some units here ASAP,” one officer can be heard saying.

Then another call for help. “Be advised inside the school we have multiple stab victims,” one of the officers said. “So bring in EMS from wherever you can get them.”

Before what was happening could sink in, Meixner noticed a girl near her extending her arm. It was bleeding.

“I dropped my books, and I ran over and asked if she needed help,” she said. She offered to take her to the school nurse, but then the rumble of stampeding students echoed at her from down the hall.

A teacher told her to hand off the wounded student and run outside. “At that point I ran out of the school,” she said.

Meixner remembered watching the news of the Sandy Hook Elementary School shootings, but that seemed so far removed. She thought something like it could never happen in her school.

“It feels really surreal,” she said.

Students standing outside the school heard its fire alarm go off.

That probably helped get more people out of the school during the evacuation order, Police Chief Thomas Seefeld said.

Students were running everywhere, and there was “chaos and panic,” he said.

Then he saw teachers running into the building and pulling “a couple of more students out,” he said. The students had been stabbed.

To stanch the bleeding, the teachers asked the students for their hoodies.

“We all took our hoodies off and handed them to the teachers to use as tourniquets to stop the bleeding,” DeCesare said.

On Thursday, Seefeld praised faculty members for their reaction. Police meet with them often, he said, and the school has plans in place to react to violence.

“It all came together,” he said.

Investigators have finished collecting evidence in the school he said. “The crime scene was quite bloody.” About 50 officers from the FBI and local law enforcement agencies had worked on the case, he said.

Officials also mentioned that the school is outfitted with surveillance cameras and metal detectors.

“He’s a typical young kid. He’s a B+ student. The family is like Ozzie and Harriet. They have dinner together every night,” said his attorney, Patrick Thomassey.

“All the students liked him,” Thomassey said.

“He worked well in groups, and this happened. So there’s a reason for it — that’s what I’m saying. And we have to get to the bottom of that,” the attorney said.

In one point, his description of Hribal differed from Meixner’s. Thomassey said his client wasn’t a loner.

He also downplayed the notion that his client had been bullied.

“I heard these rumors about being bullied. I don’t believe that’s true,” an attorney for school stabbing suspect Alex Hribal said Thursday. Attorney Patrick Thomassey told CNN’s “New Day”: “I’m sure that at a certain point we’ll find out what caused this. Maybe there is something that was going on at school that I’m not aware of yet or his parents aren’t aware of yet.”

He also did not seem to embody the cliché of digitally connected youth.

According to Dan Stevens, the county deputy emergency management coordinator, Hribal had a very minor Facebook presence and didn’t have much experience on Twitter.

‘I’m not sure he knows what he did’

Thomassey said he would file a motion to move the case to juvenile court. And he wants a psychiatrist to evaluate him.

“I’m not sure he knows what he did, quite frankly,” Thomassey said, adding that Hribal feels remorse. “He’s scared. He’s a young kid,” the attorney said.

Westmoreland County District Attorney John Peck argued against bail, saying there could be no conditions that would protect the community and noting Hribal made “statements when subdued by officials that he wanted to die.”

Hribal is being held without bail at the Westmoreland County juvenile detention center. He was treated for injuries to his hands, police said.

Authorities have not detailed a possible motive in the attack.

A search warrant has been served on the Hribal’s home, public safety spokesman Stevens said. The suspect’s cell phone was seized along with his computer and his parent’s computer.

On Wednesday, at least a dozen FBI agents could be seen going in and out of Hribal’s family home in the hours after the attack. Shortly before the agents arrived at the house, a man believed to be Hribal’s father drove up.

“My prayers go out to everyone who was injured today, and I hope they recover as soon as possible,” he told reporters.

Hribal’s attorney said the family was upset by the allegations. “They did not foresee this at all,” he said.

The students who were hurt range in age from 14 to 17, emergency coordinator Stevens said. The injuries were stabbing-related, such as lacerations or punctures.

Four victims were in critical condition Wednesday, including one who was “eviscerated” and may not survive, Peck said.

A doctor who treated six of the victims, primarily teens, said at first they didn’t know they had been stabbed.

“They just felt pain and noticed they were bleeding,” said Dr. Timothy VanFleet, chief of emergency medicine at the University of Pittsburgh Medical Center.

“Almost all of them said they didn’t see anyone coming at them. It apparently was a crowded hallway and they were going about their business, and then just felt pain and started bleeding.”

The school said that half a dozen prayer vigils were held overnight, and counseling services are being arranged for students.