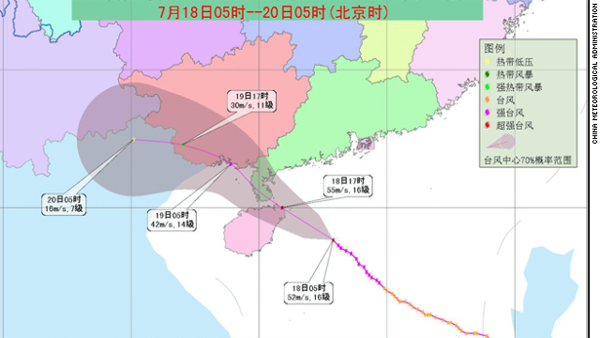 Hong Kong (CNN) — After wreaking damage on the Philippines over Tuesday and Wednesday, a newly intensified Typhoon Rammasun is bearing down on Hainan and Guangdong provinces in southern China.

The storm, which was downgraded as it passed over the Philippines, gained strength again over the South China Sea and is now battering Hainan, with its inner eye wall hugging the island’s coast.

Now categorized by the China Meteorological Administration as a super typhoon, Rammasun made landfall on the island province of Hainan at around 1.30 p.m (1.30 a.m Eastern) Friday after veering westwards.

Super typhoons are categorized as having sustained winds of 150 mph (241 km/h) or higher.

The Administration issued a ‘red’ typhoon warning, the highest of four color-coded warning levels. It is the first time this year the signal has been raised. Authorities in the region are on high alert.

“Its intensity when landing will reach force 15 to 16 (50 to 55m/s),” the bulletin said, prior to the storm reaching Hainan.

The Joint Typhoon Warning Center (JTWC) based in Pearl Harbor, Hawaii, tracked the typhoon as moving in a northwesterly direction, passing over the northern tip of Hainan and the Leizhou peninsula. The Center defines a super typhoon as having sustained winds of 130 kt; as of 11 a.m. local time (11 p.m Eastern), it was monitoring winds at 125 kt.

At 2 p.m local time (2 a.m ET) Hong Kong’s government observatory estimated the super typhoon to be around 242 miles (390 km) southwest of the city. It was not expected to affect the city beyond strong winds and rain.

Should Rammasun hit the mainland as expected, the storm is expected to produce strong gales — which may top 93 mph (150 km/h) — heavy rain and tidal surges.

Given the rapid escalation in the storm’s strength — from a category one to a category five — it is unclear how comprehensive preparations for this storm have been in the areas likely to be affected the most.

Shipping in the region has been suspended, as have some flights, including in Hainan, which is a popular holiday destination. Trains in Guangdong bound for Hainan have been halted in the provincial capital Guangzhou, and Hainan’s high-speed railway has also had operations suspended, according to China’s state-run news agency.

China’s National Meteorological Center also said that inland areas of some provinces, including Yunnan, Hubei and Henan would experience rainstorms. The NMC warned of flooding in cities and landslides in mountain areas.

The typhoon caused 38 deaths in the Philippines, as well as damage to property and infrastructure across Luzon, the largest island in the archipelago.

James Reynolds, a freelance journalist and videographer who was in Legazpi when the typhoon made landfall in the Philippines, said in a twitter post that Rammasun looked “immensely powerful — one of the strongest I’ve seen in the (South) China Sea for a long time.”

Only two other super typhoons have ever hit China, Saomai in 2006 and Marge in 1973. Saomai, registered as a once-a-century typhoon, was the most powerful typhoon ever to have made landfall over mainland China. This storm, says CNN’s Ivan Cabrera, could top both of these.

The existing typhoon record of 78.9 m/s was observed at Dalaoshan, Hong Kong, on 1 September 1962.