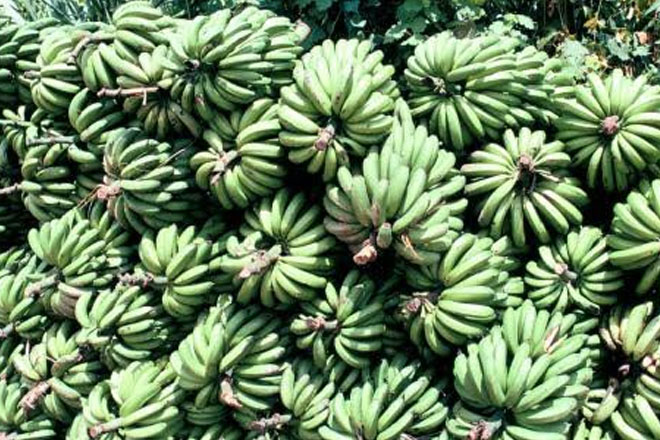 Paramaribo, Suriname — The banana industry in Suriname is currently facing a serious threat from the so-called Moko disease, which has affected nearly a quarter of the country’s 2,000 hectares of commercial banana plantations. Meanwhile, authorities here have called in the assistance of international experts in a bid to prevent a wipe out of the banana sector, which would eventually result in the loss of nearly 2,500 jobs.

“The outbreak of the disease caused by Moko bacteria poses a serious threat to the survival of the banana sector in our country. The government has already sought international aid to assist an established national crisis team in finding solutions to this national issue,” President Desi Bouterse said during the presentation of the 2016 budget in parliament last Wednesday.

Food and Agriculture Industries (FAI), the country’s banana exporter, and the two unions at the company recently rang the alarm bell, after almost 400 hectares of the 1,000 hectares at the Jarika plantation was affected by the bacterial disease. So far the Nickerie plantation has not been affected by the disease, which is spread by insects.

“This is a disaster,” said union leader Michael Sallons.

According to Sallons, staff should do its utmost to help fight the disease. All tools must be sterilized, while the boots of employees should always be disinfected to prevent the spread of the disease. Small scale banana and plantain farmers in the area and the rest of the country may be affected.

Sallons warned that people should not just buy banana plants, since they could be infected. Meanwhile, the company and the unions have launched an awareness campaign to inform and sensitize the wider population over the looming crisis.

“But policymakers have closed their eyes for the damage it could cause,” he said.

The disease was identified in 2008.

The union leader noted that numerous small-scale farmers have also been affected. He blames poor border control for the problem, which currently threatens the local agricultural sector.

“We were free from these diseases, but when you see what kind of garbage passes through the poorly controlled border, it is only a question of time before you are confronted with the problems,” he said at a press conference.

He noted that products such as pepper, tomatoes and vegetables are being smuggled into Suriname from neighbouring Guyana. Since these produce came in without any phytosanitary control, pests were introduced in Suriname that are affecting tomato and aubergine farmers.

Dwarka further warned of a new trend in which more and more local rice farmers are using illegally obtained seed from Guyana.

“By doing that, you harm your own rice industry,” the union leader warned.

He further argued that most of the rice farmers are ignorant about the disastrous consequences to which they expose themselves, the industry and the country. Import of vegetables, fruits and seeds without the required safety certification is a serious offence.

However, Dwarka said, the authorities are complicit in the current situation because it is their duty to ensure compliance with the import rules, but they fail to do so.