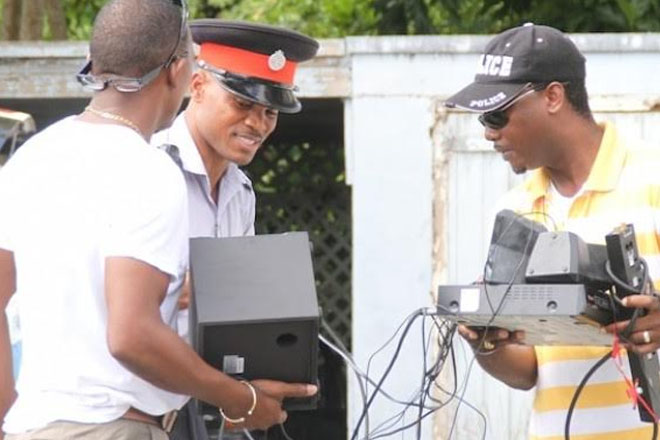 In Barbados, a landlord and tenants of a Belle Main Road, St Michael property were left shaken yesterday afternoon following a police raid which ended with the arrests of two men and the reported seizure of firearms and allegedly stolen electrical items.

Landlord Julie Stewart said the search, which resulted in a bedroom door being knocked down, was a surprising and frightening experience for her and tenants even though police assured them they were not in harm’s way.

She said what left her stunned was the fact that the man she considered to be a perfect tenant, who paid his rent in advance, and was always helpful around the house and to his roommates, was handcuffed and taken away, along with another male who was in his company at the time.

“I was downstairs in my apartment and I came out and they [police] told me to go back down and they would come and talk to me,” Stewart said, relating the experience. “I really was not looking for this because he was the perfect tenant. He cleans, he would help the old guy. I was really frightened because there were all these guns up here.”

Stewart said the police officers were professional throughout the exercise and at no time did they make her or her tenants feel threatened.

The wanted man reportedly jumped off a patio, which is about ten feet high, and landed on the edge of a gully, in an attempt to evade capture by the police.

One tenant said he had just gone on to the patio to relax when he heard footsteps, looked up and saw a group of policemen heading in his direction. He said they told him to remain where he was.

“I thought they were making sport until I see the guns and them looking serious. But them tell me I ain’t in trouble, them say, I good,” the tenant recalled.

The tenant said the individual who was arrested was always nice to him, even offering him a plate of food sometimes. However, he said he always thought something was strange about the man who, in recent weeks, was repeatedly saying that he wanted to leave the house.

As the operation took place, onlookers gathered on the other side of the busy road, waiting to see the faces of the men who were taken away in police vehicles.

When Barbados TODAY Media contacted police spokesman, acting Assistant Superintendent David Welch, he was unable to give any details, except to say that police were continuing investigations into the matter.