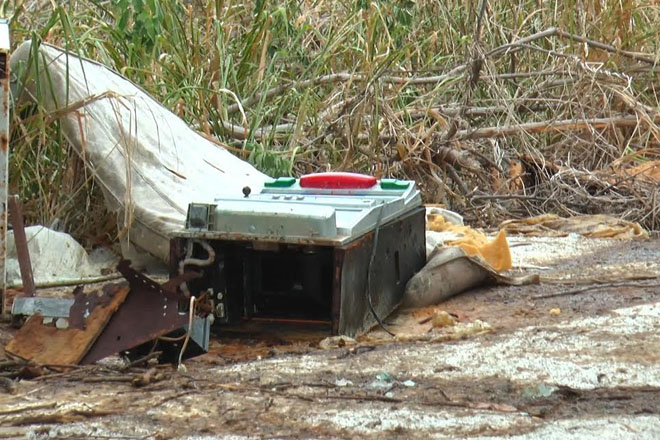 (ZIZ News) — The Solid Waste Management Corporation is concerned about dumping habits in Basseterre that may affect the already low water supply.

The dumping site at the Needsmust Estate Aquifer, much to the dismay of the Solid Waste Management Corporation, is next to a water well and pump.

ZIZ News understands that the water supply beneath the soil feeds most of the Basseterre area.

Operations officer at the Solid Waste Management Corporation Valentine Heyliger spoke with ZIZ News and explained what has been found and why there is cause for concern.

“When rain falls the water is suppose to percolate downwards and you know the stuff that they dumping there their fridge, stove and washing machines all those have some kinds of chemicals stuff. When they start break down they contaminate the water and people will get sick from that contamination,” he said.

“We are witnessing here where persons are throwing concrete from one of those concrete companies so when rain falls the water just run off and with a chemical reaction they should be able to go and seep into the soil. It’s just going to run off and go elsewhere,” he added.

Heyliger said the “indiscriminate” dumping in the water resource is unfortunate.

He suggested what persons can do to alleviate the issue of dumping and water pollution.

“I would like the general public to know they got to discontinue dumping all that stuff that should be taken to the landfill, dumping it in the aquifer in Needsmust is not right. Persons who hirer persons to take stuff to the landfill should make sure they get a computer generated receipt as proof that they brought this stuff to the landfill and not just pay them to dispose of the stuff cause they don’t know where they are carrying them,” he stated.

Heyliger confirmed that the Needsmust Estate area is not the only place that unlawful sites have been seen.

The Solid Waste Management Corporation is asking persons who witness the illegal dumping to alert the relevant authorities to bring an end to the practice.

Officials are reminding the public that items that need to be disposed of should be taken to the Solid Waste Management Corporation’s landfill site which opens at 6am and closes at 5pm.