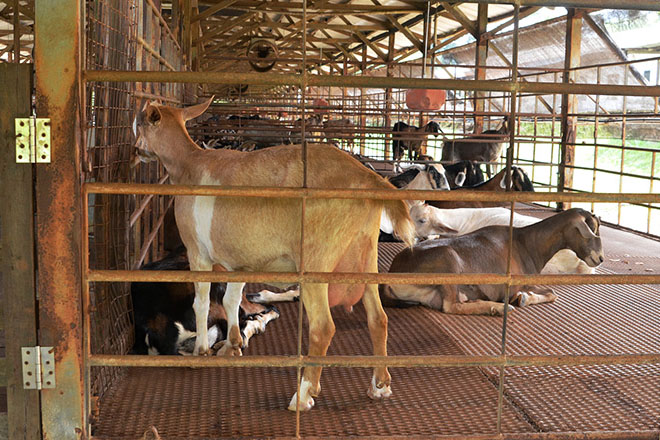 Kingstown, St. Vincent, CMC — Taiwan is providing support to St. Vincent and the Grenadines government in the efforts to boost small ruminant production through a project that will result in animals being impregnated within a week.

The project, which will be fully rolled out in May, hopes to increase the nation’s sheep and goat population by 40 per cent by 2020, thereby reducing imports of mutton and lamb.

The project includes the use of female synchronisation – bringing several animals into heat at the same time — then inseminating them artificially.

Veterinary officer with responsibility for animal production, Amelia Jack, said synchronisation and artificial insemination would be beneficial to St. Vincent and the Grenadines in that more small ruminants can get pregnant, including animals that might have had fertility issues.

Jack, who recently underwent specialised training in Taiwan, said that not only does artificial insemination give farmers greater control over reproduction in their herds, but it is also cheaper as it is very costly to maintain a male sheep or goat properly.

“One ejaculate can inseminate up to 25 females,” Jack said, adding that the compound will be taken to farms in stray, replaying a system where sire were taken to farms or females to the Ministry’s stud stations for natural insemination.

“The end point of any production is money, business,” Chief Veterinary Officer Kathian Herbert-Hackshaw told reporters as she highlighted the benefit to farmers.

“And if you can have animals synchronised, that is, come into heat at the time when you want it, and several of them one time, it is easier to mate or service with AI ten animal than to wait for them to come on heat one by one,” Herbert-Hackshaw said.

The authorities here say the project is also intended to improve the available breeds for reproduction, and provide incentives to all commercial farmers to produce small ruminant and their products that can be produced locally at competitive prices.

As part of the initiative, Jack and two other veterinary officers — Natalie Toney, and Louanne Johnson — recently travelled to Taiwan, where they underwent specialised training in artificial insemination of small ruminants.

Chief of the Taiwan Technical Mission, Chin-Yu Lee, said that in 2005, Taipei handed over the pig and chicken production projects to the government.

But he said there are still potential issues with animal production, resulting in the small ruminant project, which was conceptualised in 2010.