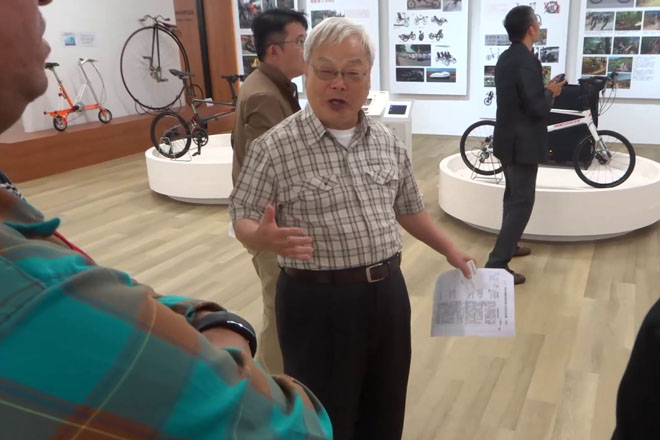 (ZIZ News) – An international press group that visited Taiwan continued meeting with officials last Wednesday to look at innovations in transportation that focus on environmental sustainability.

ZIZ’s Jason Davis was part of that group.

The group first visited Pacific Cycles, one of the largest bicycle manufacturers that also provides research and development facilities for more than 40 brands worldwide.

The company has also established a museum chronicling the history and evolution of the bicycle.

President of Pacific Cycles, George Lin took the group on a tour of the facility, showing them the newest innovation in folding bicycles.

He said the brand Birdy has been very popular and was redesigned to be stronger and fold even smaller.

The chance was able to test ride the newest models and try out a device that turns a standard bike into an “exercycle”.

Lin said he was passionate about the bicycle because it not only saves the environment, but it is a social device that brings people together.

From pedal power to scooters of the future, the group visited the home of Gogoro Smartscooters.

A company representative said the electric scooter had not really taken off because consumers find recharging to be inconvenient.

However, Gogoro plans to launch a network of charging stations similar to gas stations.

“Our battery plugs into the go station. And the first thing is that it will identify who you are and will upload your information including your speed, high speed, average speed, and miles and then download it into the new battery,” the company representative stated.

The Smartscooters are still in the development stage and are expected to hit the Taipei market later this summer.