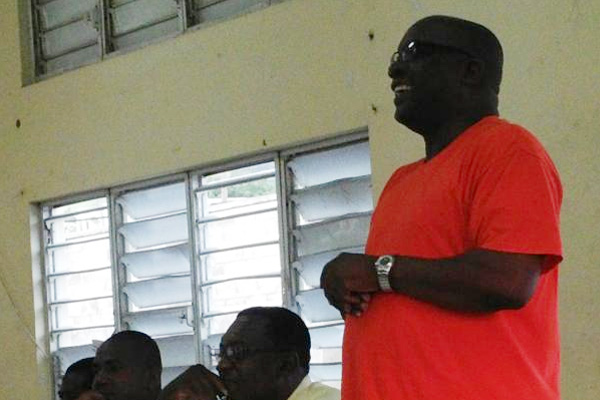 Basseterre, St. Kitts (Team UNITY Communications) — Dr the Hon Timothy Harris, Leader of Team Unity, told a large turnout of Guyanese nationals at a Town Hall meeting at St Peters Community Centre held on Sunday 6th October, 2013 that, “You can count on a Unity Government to deliver. We have heard from you. We understand your concerns and frankly we can do more for you and we will. We love and care for you and we will work for you not just at election time but all the time.”

Dr Harris said CARICOM nationals were making productive contribution to the socio-economic development of St Kitts and Nevis and “we must create the environment in which each endeavour and each can achieve”. He asked that all enjoin in building a better St Kitts and Nevis marked by steady economic growth, a strong democracy, reducing murders and other crimes which had spiralled out of control.

Guyanese appreciate when a country loses its democracy it will be challenged in its development.

Everyone here is being challenged by an economy that has been in recession for 4 years. As a result, new jobs are scarce, the bills are too high and in the frustration people are not as happy and welcoming. “Opportunities are disappearing and people are concerned about the shrinking national pie and who shares in the pie”.

We understand immigration. We must treat immigrants with the same respect, dignity and appreciation we want for our people who have migrated to other countries like St Maarten, Tortola, USA, Aruba, UK, etc. Dr Harris said he and his team will work to end discrimination against CARICOM nationals as part of its fairness agenda.

Dr Harris outlined that under the free movement agenda of the CARICOM Single Market and Economy, the idea is a single economic space in which CARICOM nationals can move and live without hindrance subject to their compliance with laws. Already some CARICOM nationals do not require work permits for example graduates, trained teachers, registered nurses, media workers, sports personalities, artisans and artists. Eventually work permits will be phased out under CARICOM Free Movement Programme.

Team Unity promised to deal with the hardships and insecurities being suffered by CARICOM nationals in accessing work permits. Harris pledged to re-visit fees for their children to access hospital services and the Clarence Fitzroy Bryant College (CFBC).

The Guyanese community made their voices heard on several issues. Questions were raised and the Team Unity Candidates responded candidly. The evening ended with refreshments and one on one engagement between the Guyanese nationals and their Candidates and Representatives. Several Guyanese expressed strong, personal support for Unity

Leader Dr the Hon Timothy Harris, and for a Unity government. Dr Harris said, “Team Unity welcomes the opportunity to have met with our people from CARICOM residing here. We had a mutually beneficial meeting and we look forward to serve excellently all our nationals and residents including those from CARICOM member states.”