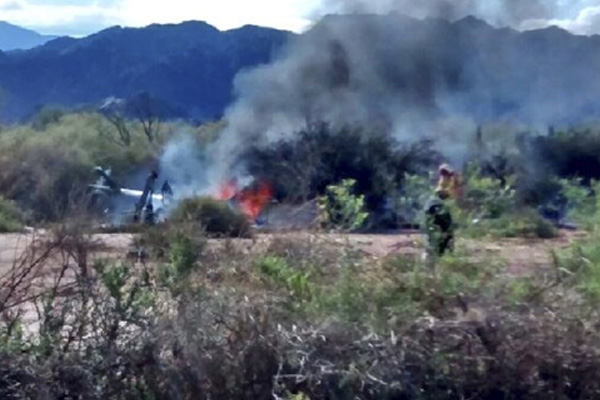 “There are several French nationals among the victims. So far we only know of two Argentine victims,” La Rioja province government spokesman Disel Cuneo told AFP.

Another provincial spokesman, Horacio Alarcon, said that the two helicopters appeared to have collided during filming.

“There are no survivors,” he added.

Alarcon said the weather conditions were good and the cause of the crash was unknown.

The crash happened in a mountainous part of La Rioja, whose scenic landscapes are popular with tourists, around 1,100 kilometers (700 miles) north of the capital Buenos Aires.

Argentine media showed the wreckage of the two helicopters in flames on the dry scrubland.

A picture released by NA shows the wreckage of a helicopter burning in flames after colliding mid-air with another chopper near Villa Castelli, in the Argentine province of La Rioja, on March 9, 2015. (Photo: AFP)