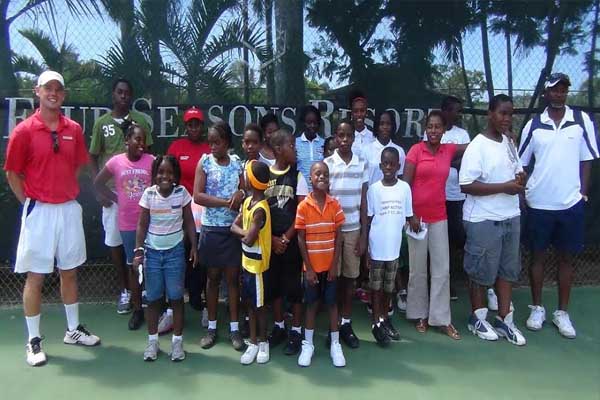 (Sports Page)— As part of the ongoing summer camp, coordinated by the Department of Youth and Sports, the Tennis segment of the camp got underway at the prestigious Four Seasons Resort on Monday 21st July.

The Tennis clinic which will run for two weeks is being conducted under the direct supervision of the Four Seasons Resort’s Tennis pro, Chris Myrold and President of the dormant Nevis Tennis Association, Anthony Webbe.

There are twenty children attending the camp and they are in the direct care of Ms Vera Herbert and Ms Shoya Lawrence who are representing the Department of Youth and Sports.

Both ladies thanked the Four Seasons Resort management and staff for their significant way of giving back to the community as it was noted that this is the 13th year that the hotel is offering such a service to the potential Tennis stars.

Chris Myrold for his part, noted that he has been part of the program for the last four years but paid tribute to Anthony Webbe who has been a part of it for all 13 years.

He indicated that the children will be taught the basics of Tennis which will include forehand, backhand, serves and rallies. They will also be taught how to keep score as well.

At the end of the tournament he is hoping to have a few matches between the young Tennis players.