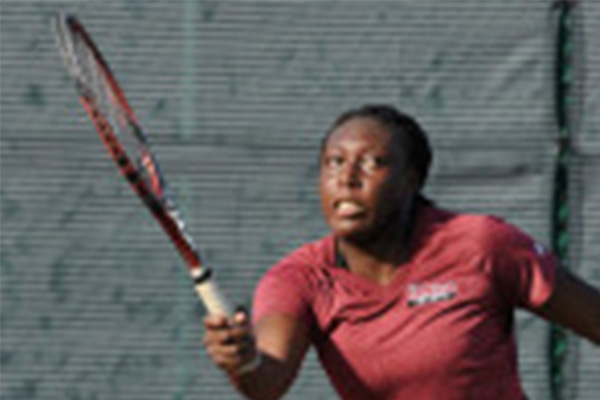 AMHERST, Mass. — The UMass tennis team suffered a 5-2 loss to George Washington on Saturday, March 1 at 5 p.m. in the indoor Stadium Tennis Center. The Colonials (2-3) swept the Minutewomen (5-5) in doubles play and clinched four of six singles matches.

George Washington opened the afternoon with three consecutive wins in doubles play. Isabella Escobar and Taylor Nederlander defeated Yuliana Motyl and Aarzoo Malik, 8-5, at the No. 1 spot while Grace Egger and Lana Robins picked up the No. 2 match, 8-6, over Jessica Podlofsky and Arielle Griffin. Sonia Bokhari and Chanel Glasper rounded out the doubles pairs in an unfinished match, 7-5, against George Washingotn’s Leah Pascarella and Stephanie Wei.

In singles action, UMass captured the No. 3 and No. 4 matches in straight sets thanks to Malik and Griffin. Malik topped the Colonials’ Wei in No. 3 singles, 6-3, 6-2, while Griffin tallied a 6-3, 6-3 victory over Egle Jakuciunaite. George Washington secured the afternoon with singles wins at the No. 1, 2, 5 and 6 spots, winning all matches in straight sets.

Saturday marked the first Atlantic-10 conference match and victory for George Washington this season, while UMass now falls to 1-1 in-conference after a win over Fordham and a loss to the Colonials.

The Minutewomen return to action on Saturday, March 8 when they will face Columbia in non-conference action in New York, N.Y. at 12 p.m. UMass will compete in five road matches before returning home on April 4 to host Saint Joseph’s at the Bay Road Tennis Center.

N.B.  Arielle Griffin is the daughter of Nevisians Venette James and Sylvester Griffin