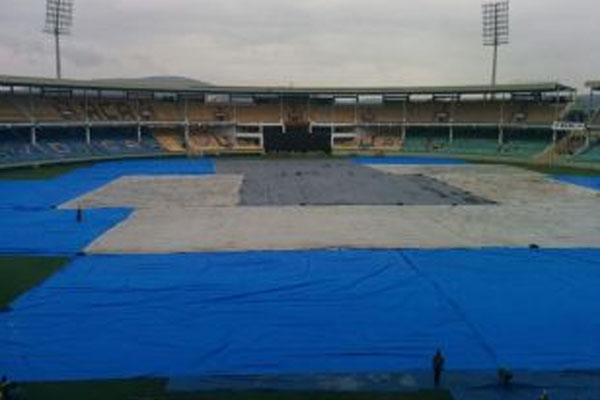 Third ODI abandoned because of cyclone

Sports Page — The third ODI between India and West Indies on October 14 in Visakhapatnam has already been abandoned because of a cyclone on the country’s east coast. The game will not be rescheduled and the series is now a four-match contest.

The Indian Meteorological Department had issued warnings about Cyclone Hudhud at least three days in advance, but the BCCI decided against moving the game out of Visakhapatnam, a port city where the cyclone made landfall on Sunday. A BCCI source said it would have been logistically difficult to move the match to another venue in two days time.

With flight services to and from Visakhapatnam suspended, both teams remained in Delhi, where they had played the second ODI on October 11. It is understood the managements of both teams have been advised to be prepared to travel to Dharamsala for the fourth ODI. BCCI joint secretary Anurag Thakur, who is also the president of the Himachal Pradesh Cricket Association, the governing body of the Dharamsala stadium, said it was yet to be decided whether the teams will travel to Dharamsala on Tuesday or Wednesday.

“Due to extreme weather conditions, the BCCI has had to cancel the [third] ODI. It is disappointing but we cannot overcome natural calamities,” Thakur told ESPNcricinfo. “Even though the host association was hopeful of staging the match if weather cleared, the BCCI didn’t want to take any risk.”

This is the second time in the last five years that a cyclone has washed out an ODI in India. The seventh match of Australia’s tour in 2009-10, to be held in Mumbai, was abandoned because of Cyclone Phyan off India’s west coast.

The series is level 1-1 after India won the second ODI against West Indies in Delhi.