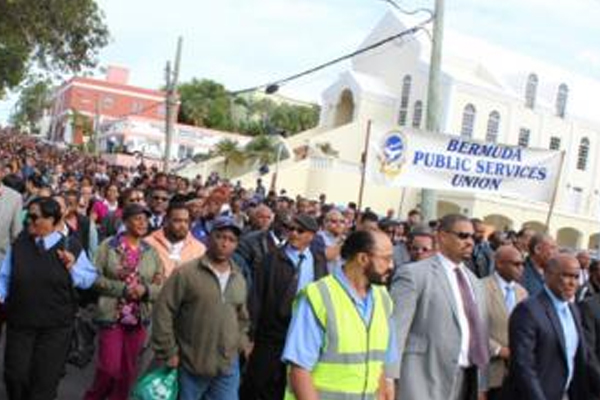 However, a meeting with government representatives scheduled for 3:00 pm did not take place and another meeting of union members is expected to take place on Tuesday at 9:00 am.

On July 25, 2013, all six public sector unions agreed to a 4.6% reduction in pay, with civil servants receiving one unpaid and un-worked day per month for two years, and a pay freeze until 2015. Estimated savings were expected to be $21 million in the first year and $42 million in the second.

A year later, on July 20, 2014, the One Bermuda Alliance (OBA) government tabled the “For Information” Public Bodies Reform Bill 2014 in the House of Assembly. This bill set the groundwork for the privatization, mutualization or outsourcing of government workers’ jobs

On October 6, 2014, the Bermuda Public Services Union (BPSU) released a report outlining its position against the Public Bodies Reform Act.

Later that month, on October 26, the government agreed that:

In December 2014, the Budget Reduction Working Group proposed cuts that would result in an estimated $37 million savings; however, the government demanded further cuts and extended the deadline to December 17.

Last Friday, the government issued a letter to the BTUC seeking “a furlough day or a furlough day equivalent” from their membership and demanding a response by Monday, January 26.

The meeting to vote on the proposal was therefore called by the Bermuda Trade Union Congress, which acts as an umbrella group for the following unions: