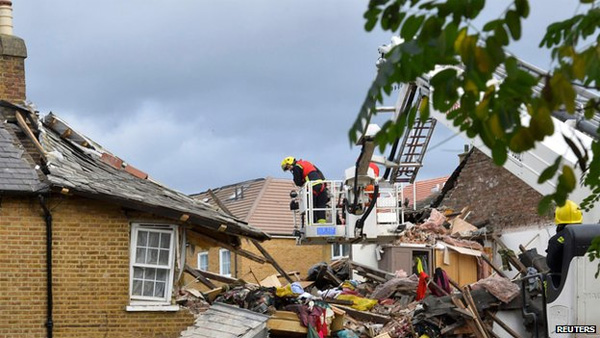 A teenager in Kent and a man in Watford were killed by falling trees.

And a man was found dead in a collapsed house in west London after a falling tree caused a suspected gas explosion.

Network Rail said the damage to railway lines had been “worse than expected”, with more than 100 trees on the lines, but some train services had resumed.

The strongest gust of 99mph (159km/h) was recorded on the Isle of Wight.

BBC forecasters say the storm has now ended in the UK – leaving a “broadly windy day”.

A 17-year-old girl suffered fatal injuries when the tree came down where she was sleeping in Edenbridge, at about 07:20 GMT.

Ch Supt Steve Corbishly from Kent Police said: “She was in a static home adjoining the house she lives in with her family. Tragically, she did die at the scene. It’s not being treated as suspicious but we’re working with Fire and Rescue to determine the exact cause.”

A man in his 50s was pronounced dead at the scene after a tree crushed a red Peugeot 307 at Lower High Street in Watford, Hertfordshire, at 6:50 GMT.

Mark Joseph, who was passing by before the emergency services arrived, said: “We tried to assist, trying to get the tree off, but it was impossible… The poor chap didn’t stand a chance.”

The Environment Agency has issued 11 flood warnings – in south-west England, East Anglia and the Midlands – where flooding is expected. There are also 121 flood alerts, where flooding is possible, across England and Wales.

It says there is an increased risk of flooding from rivers following the heavy rainfall, and large waves and strong winds may continue to cause some minor coastal flooding along the south coast.

The Energy Networks Association, which represents power companies across the UK, confirmed 270,000 homes were without power.

A spokesman said 310,000 households which lost power earlier had been reconnected, but more had been cut off as the storm moved north and eastwards.

Network Rail said several hundred staff have been working to monitor conditions and react to any damage.