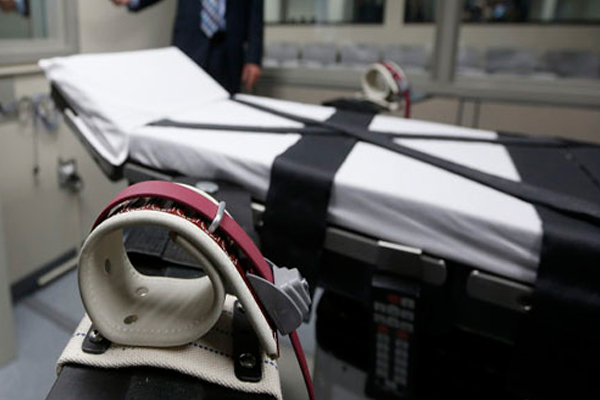 Top US court to consider use of lethal drugs in executions

Washington, United States (AFP) — The US Supreme Court agreed Friday to consider whether a cocktail of lethal drugs used for executions in Oklahoma represent cruel and unusual punishment.

Three inmates on death row in the central state are challenging the multiple drug protocol that was at the center of a botched execution in April last year.

The nine-member court is expected to hear the case in April and come to a decision in June, according to US media reports.

Cruel and unusual punishment is explicitly banned under the US Constitution.

Oklahoma suspended executions after it took an agonizing 43 minutes — not the expected 10 minutes — for convicted murderer Clayton Lockett to die after he was given an untested mix of lethal drugs.

Lockett was seen writhing in pain, bucking off the gurney and mumbling unintelligibly.

His execution revived an emotional debate about capital punishment in the United States, where 35 inmates were executed in seven states last year and around 3,000 convicts remain on death row.

Initially, four inmates in Oklahoma challenged the state’s use of midazolam, an anesthetic not approved by the US Food and Drug Administration, as one of the drugs used for capital punishment.

But one was executed by lethal injection on January 16 just over an hour after the Supreme Court rejected his last-minute appeal for clemency.

In its decision Friday, taken in private, the Supreme Court justices did not delay the planned executions of the three inmates, one of whom is set to die next week.

“The time is right for the court to take a careful look at this important issue, particularly given the bungled executions that have occurred since states started using these novel and experimental drugs protocols,” said lawyer Dale Baich, who represents the Oklahoma prisoners, in a statement.

In an email exchange with AFP, Baich said lawyers would be asking for the upcoming Oklahoma executions to be put on hold.

In 2008, the Supreme Court ruled that lethal injections were constitutional. But since then, a majority of states have changed their drug protocols due to a shortage of the old standards.

“The drug protocol used in Oklahoma is not capable of producing a humane execution, even if it is administered properly,” Baich said.