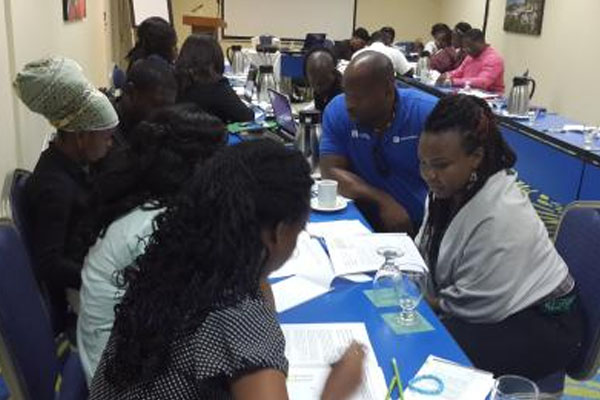 St Georges, Grenada — Grenadian media workers got the opportunity to understand the strategic advantages that strengthen Grenada’s potential as a competitive investment destination within the CARICOM Single Market (CSM).

These insights were elaborated upon during a CSME media workers training workshop held in St Georges from March 18 -20, 2015 by human resource consultant attached to the Grenada Industrial Development Corporation (GIDC), Michelle McDonald, a Jamaican citizen living in Grenada on and off since 1997, and employed there on a full time basis since 2005.

Also a tourism and hospitality professional, McDonald was invited to present a CSME skilled national trailblazer testimony to media workers, as someone who has exercised her right to move and work in the CARICOM Single Market.

Consistent with the workshop’s theme: Five Ws Pathway to Ground Breaking News Content on the CSME – Mining the Hidden Gems, the purpose of the trailblazer testimony was to unmask the “who” news element in the CSM story, by demonstrating that there is news value beyond the number of skilled national certificates issued or businesses established.

McDonald’s participation provided an example of how to track and tell the CSM story through the experiences of real Caribbean Community (CARICOM) nationals.

According to workshop facilitator Barbara Jacobs-Small, putting a face to the CSM highlights the human interest aspects of the CSM, which makes the opportunities and benefits of free movement easier to perceive and to pursue for artisans, graduates, or entrepreneurs who can see themselves following in the example of others just like them.

McDonald used her presentation to challenge the idea that size can be a limitation in the construct of the CSME. Grenadian journalists, she said, should not be afraid to strike out because they are from one of the smaller CARICOM member states “because the CARICOM skill certificate does not have a size restriction”.

She said competition is about finding out and leveraging one’s unique advantage, mindful that different people are moved by different things. In that regard, the GIDC consultant proposed that Grenada has strong appeal for the tourism and hospitality investor because, the Grenadian temperament contributes to the natural tranquility which makes it “an ideal place to nurture one’s soul; its people embody community spirit.”

“After visiting approximately 15 Caribbean islands in my lifetime so far and having been in the tourism industry all my life, I can say with certainty that Grenadians are the most naturally friendly persons I have ever encountered. Their desire to make sure you are ‘okay’ makes them perfect to work in the tourism industry,” she said.

McDonald went on to say that these characteristics are appealing to both CARICOM neighbours who are nostalgic about the “brother’s keeper values” that characterized the traditional Caribbean village, while Grenada’s tranquility and relatively low crime rate trounces many other Caribbean destinations, for international investors and visitors, more so due to concerns about security exacerbated by the upsurge in terrorism.

The CSME workshop was a collaborative initiative between the CARICOM Secretariat, the ministry of foreign affairs and the Media Workers Association of Grenada (MWAG). Twenty-seven media workers representing every media system in Grenada participated in the workshop.

The media training concludes activities under the CARICOM Single Market information flows project which is building the framework for heightened public education and awareness on the CSME, led by the focal point ministries in the six CARICOM beneficiary member states of Belize, Jamaica, Dominica, Grenada and Guyana and St Vincent and the Grenadines.