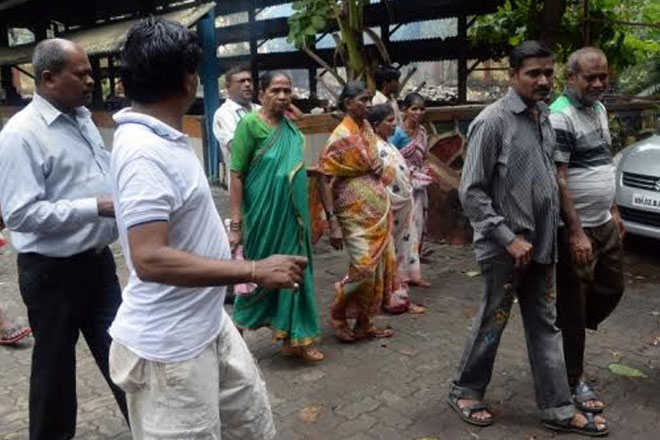 Mumbai, India (AFP) — The death toll from India’s latest case of mass bootleg liquor poisoning rose to 100 Monday as authorities in Mumbai pledged to crack down on the illicit trade.

Dhananjay Kulkarni, deputy police commissioner in the western Indian city, announced the updated toll in Mumbai’s deadliest incident of alcohol poisoning for over a decade.

“The death toll is now 100 and 47 people are receiving treatment in hospital,” he told AFP.

Victims first started to fall ill during the middle of last week after drinking the illegal home-made moonshine in a slum in the north of the city, India’s financial capital.

“We are confident that we have seized all of the spurious liquor so the death toll may stabilise soon,” the deputy commissioner said.

Kulkarni said police had arrested two women accused of supplying the liquor, raising to seven the number of people detained for distributing the alcohol in the suburb of Malad West.

He added that one of the women detained was suspected of having sold bootleg moonshine in the area for ten years.

Police are still waiting for the results of an investigation to determine whether high levels of methanol were present in the so-called country liquor, Kulkarni added.

Methanol, a highly toxic form of alcohol used as anti-freeze or fuel, is often added to illicit booze in India as a cheap and quick method of raising the alcohol content.

Unlicensed liquor is widely consumed across the country where it is sometimes sold for less than a dollar for a 25-centilitre bottle, with deaths frequently reported.

It is rare however for such incidents to occur in a major city like Mumbai, with most cases taking place in poor rural villages.

The latest incident is the worst case of its kind to be recorded in Mumbai since 2004 when around 100 people died.

Mourners on Monday attended a sombre Hindu ceremony for one of the victims, 32-year-old Shyam Dhotre.

“Our tears have dried up,” his father Lalu Dhotre told AFP. “We’ve lost our son. Thirty-two is no age to die.”

Police have come in for criticism with eight officers suspended for “negligence” for allowing the sale to take place on their patch.

The Press Trust of India news agency quoted Fateh Singh Patil, additional commissioner of police in Mumbai’s north, as saying he had instructed all units in the area “to ensure that the entire zone is free of country-made liquor”.

He wanted to see that “no further loss of life is reported due to this social evil”, PTI added. Patil also called on women to act as “informers” against bootleggers, the agency said.

There have been numerous cases of mass alcohol poisoning in India in recent years. The worst was in 2011 when nearly 170 people died in the eastern state of West Bengal after drinking moonshine.