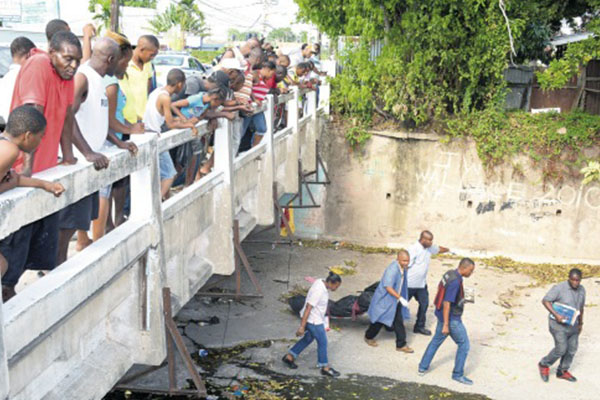 The shocking murder, committed at the couple’s home in the Oaklands housing complex on Constant Spring Road, St Andrew, took a gruesome turn early yesterday morning when the cop’s body was found a few hundred metres away in the Shortwood gully with a gunshot wound to the head.

“He was clutching a .38 revolver in his hand,” Superintendent Steve Brown, who heads the police force’s Corporate Communications Unit, told the Jamaica Observer.

Brown, who pointed out that Constable Thompson was “on suspension for a year now for his involvement in a shooting incident in Westmoreland”, said that the dead cop was not a licensed firearm holder. Therefore, the police are trying to determine where he got the revolver — which was not a service firearm — he was found clutching.

The tragedy of the murder and suspected suicide rocked Campbell Thompson’s family, who expressed great concern for the couple’s three-year-old son.

“I heard that she had just come in, and he was waiting for her and they had a struggle,” Campbell Thompson’s aunt, Eleanor Gray, told the Observer as undertakers retrieved Thompson’s body from the gully while a crowd looked on.

“I know they were having some issues earlier, but she didn’t tell me, she is a private person. But I normally encourage her, whatever the problem is, take a break, go somewhere, take some time off… I guess she was just waiting on her leave (vacation),” Gray said of her niece who was an accountant at telecoms giant Digicel.

“It’s just sad for the whole family. We didn’t see this coming. It’s sad, sad,” Gray emphasised, adding that Campbell Thompson’s mother, who lives in St Mary, was hit hard by the news.

Asked whether Campbell was a violent man, Gray said “no”. “He was a nice guy, a nice guy, that’s why we just didn’t see this coming.”

While people in the crowd gathered on Shortwood Road were heard expressing anger at the murder, Superintendent Brown said that the police high command had dispatched the Chaplaincy Unit to both families to provide counselling.

He appealed to members of the police who are having problems to discuss them with the constabulary’s counsellors.

“One of the concerns we have is that police officers who are having issues may not want to come forward and discuss them. However, if the police high command is made aware that there is a problem, the Chaplaincy Unit will assist,” Brown said.