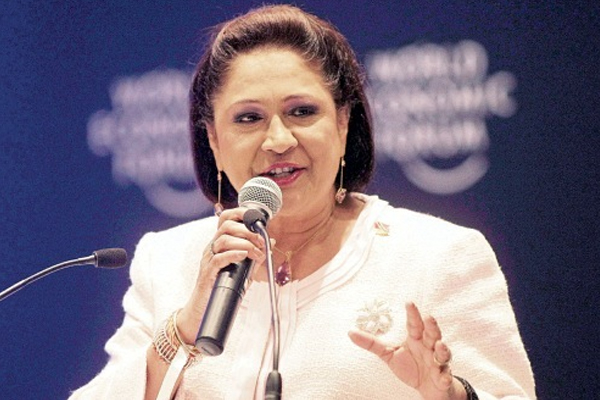 Trini pensioners get $5000 cheque in January

Port of Spain, Trinidad (Trinidad Express) — Pensioners will continue to see Christmas in January with a $5,000 pension cheque.

For the public at large, there will be a 20 per cent discount on rice, sugar, flour and oil for the Christmas season, as was the case during Eid and Divali.

Prime Minister Kamla Persad-Bissessar made the announcements yesterday at the Diplomatic Centre, St Ann’s, where thousands of food hampers were distri¬buted to people from diffe¬rent constituencies.

She said pensioners will receive their increased $3,500 pension, plus three months of $500 increases owed to them for October, November and December 2014. In October, Finance Minister Larry Howai announced the pension grant would be increased from $3,000 to $3,500.

Persad-Bissessar, in response to questions from the media, said Howai had advised there was no need to panic because of the falling oil prices.

She reiterated her Government continues to monitor the situation, but no cuts would be made to social programmes that help the most vulnerable in the societ¬y; and there will also be no cutbacks in the health sector.

The Prime Minister said she wants the people of this country to have lives free from fear of crime and the challenge of poverty. “As long as God gives me health and strength, I will remain committed to working with everyone here and in our country to create a better life for every citizen of Trinidad and Tobago,” she said.

Persad-Bissessar said the toys distributed during the eight toy distributions she had throughout the country were donated by “good Sama¬ritans’’. “I did not receive those gifts. I was just a conduit. There is a committee that received the toys and the treats and that committee organised it, and I was the person just giving them back, handing them back,” she said.