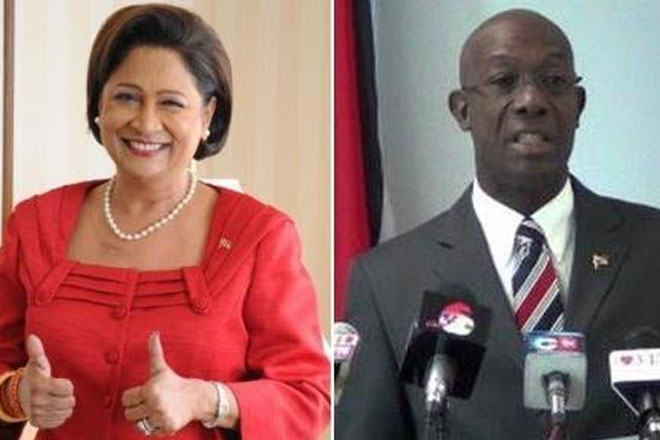 Trinidad and Tobago goes to the polls as recession looms

Port of Spain, Trinidad — Voters in Trinidad and Tobago go to the polls on Monday in a general election, largely uninformed of a worsening economic outlook. Whoever forms the government on Tuesday – the ruling People’s Partnership (PP) coalition or the opposition People’s National Movement (PNM) – will have to face a likely economic recession – something both parties have studiously avoided talking about – along with high levels of crime and a lack of infrastructure.

The twin-island nation, with a history of high voter turnout and blessed with energy resources, is in the midst of infrastructure development and elevated violent crime rooted in drug trafficking.

With population of 1.3 million, nearly 750,000 are expected to cast ballots to elect 41 parliamentary candidates for the next five years.

The governing coalition of four parties led by Prime Minister Kamla Persad Bissessar is likely to return to office with a very narrow majority, largely on its relatively stronger record of governance and infrastructure development.

Self-proclaimed political kingmaker Jack Warner, now facing extradition to the US to face multiple racketing and corruption charges, appears to have lost his once dominant position in the country and may not even win re-election to parliament after achieving the largest majority support from voters in his constituency for three successive elections.

In the meantime, several challenges remain in the country, especially the growing use of Trinidad as a transshipment hub for drug trafficking by the Mexican and Colombian cartels, which has overshadowed much of the development work on the island.

Persad-Bissessar, 63, assumed office in 2010 as Trinidad and Tobago’s first woman prime minister but, at times, her government has stumbled with corruption scandals and lack of coherent planning.

However, the coalition managed to stabilize the faltering economy and curtail crime but has failed to block drug trafficking and diversify the economy.

Trinidad and Tobago, unlike other Caribbean islands, has better managed institutions and physical infrastructure but the nation has struggled to provide basic amenities to many of its residents.

During Persad-Bissessar’s tenure, access to running water has finally reached four out of five residents from only one in five residents at the start of her administration.

Her administration has worked hard in improving social services and basic amenities to residents and in making the government more transparent.

The prime minster has focused on providing healthcare, especially for children and has built several new hospitals in smaller towns.

Her administration has also ramped up road construction and renovation and extending the highway network.

However, the island remains severely underdeveloped outside the northeast region and much of the southern and western regions remain rural and lack a transportation network.

The PNM, led by 66-year-old geologist Dr Keith Rowley, has strong support in many poor regions in the north.

However, the current opposition party that governed the nation for much of its 53 years of independence has struggled to excite its deep and loyal political base.

Historically, the PNM has enjoyed strong support of people of African descent, which make up about 35 percent of the population in a racially polarized country.

The people of Indian descent have steadily grown from a meager 10 percent to 35 percent of the population in the last five decades and the demographic is finally large and vocal enough to demand access to government services and jobs.

Traditionally, government jobs have gone to people of African descent under PNM rule and people of Indian descent have suffered from the lack of access to government programs.

In the current election campaign, PNM has struggled to offer a clear plan to voters and at times had to defend the party’s spotty track record of development.

Rowley and the PNM have focused on highlighting corruption scandals and mismanagement of the economy under Persad-Bissessar but have failed to offer a viable growth and economic diversification plan for the nation.

Also, the PNM has a weak track record of managing the economy during tough times.

Trinidad and Tobago has relied on its rich deposits of oil and natural gas, and the petrochemical sector to generate 80 percent of export revenues.

In the last 15 years, oil production has steadily declined from 215,000 barrels daily to 81,000 and the natural gas fields discovered in 1999 have been ageing and production has been declining in the last three years as well.

The country remains overly reliant on its energy exports for foreign currency to pay for virtually everything that is consumed on the two islands.

The PNM manifesto has based its spending plan on an average oil price of $80 a barrel and Prime Minister Persad-Bissessar is still telling the nation that the price of oil is expected to rise from its current low, neither of which expectation is likely to be realised.

Oil production continues to rise in the US and Brazil, and Egypt has just discovered the largest-ever natural gas deposit. Excess oil and gas production in the US and other nations is only going to depress further the already low energy prices, the only source of foreign exchange for Trinidad and Tobago.