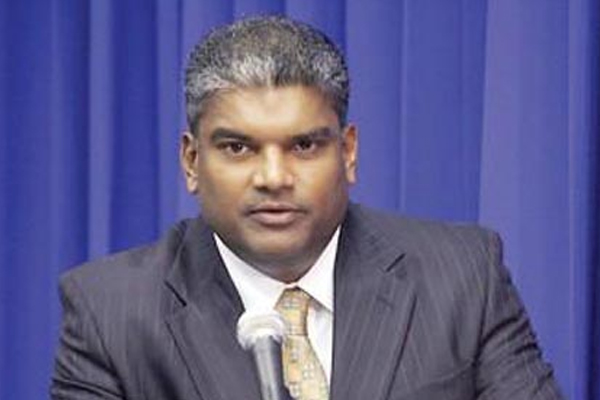 Port of Spain, Trinidad (Trinidad Express) — Anand Ramlogan’s job as Attorney General of Trinidad and Tobago hangs in the balance.

He is the first Attorney General to face a criminal investigation.

And as Prime Minister Kamla Persad-Bissessar flew home last night, one thing must have been on her mind—can Ramlogan, who has survived many controversies and calls for his head, continue to properly discharge the functions of his office with the cloud of a criminal probe hanging over him.

The probe centres around the allegation that on October 31, six days before his appointment as Police Complaints Authority (PCA) Director, David West was approached by the Attorney General with a request that he withdrew his witness statement in the Section 34 defamation lawsuit brought by the Attorney General against Opposition Leader Dr Keith Rowley, in exchange for the appointment to the directorship.

The controversy, first exposed exclusively by the Sunday Express, took a dramatic turn yesterday as West visited the offices of Acting Police Commissioner Stephen Williams and presented him with a signed statement in which West confirmed the allegations of “an attempt to pervert the course of justice” against Ramlogan. Williams immediately announced that he had ordered a criminal investigation into the matter.

These events quickly fuelled reports that the Attorney General, whom sources said held a meeting with acting Prime Minister Errol McLeod, was packing up and preparing to vacate his office. The name of Larry Lalla, one of the members of Ramlogan’s legal circle, was even being floated as his replacement. But by 6:00pm Ramlogan issued a defiant statement dismissing the “spurious allegations” which were “part of a wider political conspiracy” and indicating that he expected to the vindicated. Ramlogan, who signed the release as Attorney General, stated that he welcomed the probe by the Commission Williams in the allegations made by West. “I trust that the investigation would be handled professionally, thoroughly and expeditiously. I will cooperate fully with this investigation and look forward to my vindication”,

Ramlogan concluded: “All parties must now allow due process to take its course. These latest spurious allegations are but part of a wider political conspiracy that is designed to damage the government as we draw closer to elections”.

Ramlogan’s four-and-a-half year tenure has been turbulent as he has been involved in many controversies but this latest one is the most serious and threatening of all.

Some of other controversies include emailgate which involved allegations against top office-holders; Prisongate in which the Solicitor-General alleged a conspiracy relating prison litigation matters which led to her resignation; the Section 34 bill; the sending out of a release purportedly authored by the Chief State Solicitor when it was not; the Range Rover controversy; the Chaguanas West by-election motor vehicle accident involving his car and the war of words with the former PCA director Gillian Lucky over the alleged leak of the PCA Report into the Flying Squad.

Up to press time last night Ramlogan was said to be in his office and access to his floor had been restricted. Congress of the People leader Prakash Ramadhar has called for the investigation to be conducted in the shortest possible time.