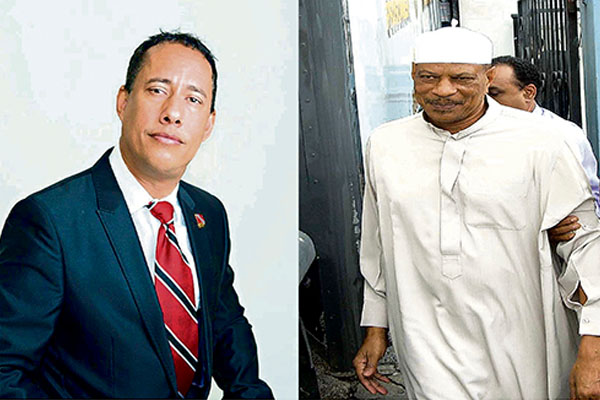 TRINIDAD – Griffith to Abu Bakr: The evil that men doeth live after them…

Port of Spain, Trinidad — “THE EVIL men doeth, live after them and at times even while they are still alive”.

This was a line contained in a statement issued on Tuesday by Minster of National Security Gary Griffith following the barring of Muslimeen leader Yasin Abu Bakr from Jamaica last week.

Griffith, in the 12 paragraph statement entitled “Abu Bakr needs to face reality : don’t blame Trinidad and Tobago for your past actions”, said the decision to debar Bakr should be applauded, and emphasised that national security takes precedence over everything else.

“The decision by the Jamaican authorities to debar entry of individuals deemed a threat to its national security should be expected and applauded, as such firm actions assist with the strengthening of our regional society. These actions are consistent with a recent similar stance taken by our Immigration officials, and also emphasized the position that national security takes precedence over everything else. Such appropriate actions to monitor and control movement of persons entering a country cannot and should not be seen as ‘muddying waters or affecting integration’, “stated Griffith.

And in response on Tuesday, Prime Minister Kamla Persad-Bissessar said that she endorsed Griffith’s comments.

“Those matters are matters of national security and matters of immigration. I am guided by the comments made by the honorable Minister of National Security and I endorse his comments”, said Persad-Bissessar “I noticed that someone from Guyana was also banned entry and you cannot say that it was comments made in Guyana that caused that person to be banned. Jamaica has its own national security and I would want to believe they acted upon that rather than any words that were said in Trinidad and Tobago.”

The National Security minister said in his statement that currently there seems to be a misunderstanding by a few that the CARICOM Single Market (CSME) provides the opportunity for anyone to be allowed entry to any CARICOM State and not be prevented full access.

Griffith said persons can be denied entry if “a. they are deemed undesirable, such as being a threat to national security, or b. they are a liability to the public purse : no employment, no skills, no recommendation, no funds, no assets, no stable place of abode, etc.”

“If persons are denied entry for such grounds those decisions should be respected by all, similar to what was done by Jamaican officials with respect to Mr Abu Bakr ad Mr Gerard Perreira a few days ago. It is the right of the Jamaican authorities to deny entry to anyone who may be deemed a liability to its public purse or a threat to national security.”, stated Griffith.

“Bakr’s statement that Jamaican officials were alluding to the fact that it was because of the Trinidad and Tobago Government that he was denied entry – is a ‘red herring’ made up by the machinations of someone who refuses entry to face reality. Mr Perreira, a Guyanese national who was also denied entity confirms that the point the Jamaican authorities have taken a firm, yet mandatory stance on ensuring that the security of their nation as they interpret it”.

“The decision of a nation to secure its sovereignty must respected”, Griffith said. “If anyone attempts to openly attack the democracy of a country and deliberately use violence to overturn a Government and innocent people are killed, resulting in both regional and international notoriety for a country, then one can at times expect some measure of resistance at any port of entry in a democratic state”

The statement continued: “Privy Council rulings have nothing to do with the views that a country would have of the character of a man and its right of the country to act accordingly to protect its sovereignty if it perceives that such a person can be deemed a threat to national security. It must be underscored that denial of entry into a sovereign, democratic country means that there was ample rationale for such action as evidenced by that country’s national security apparatus. It is evident in certain scenarios that persons must look within their past, and comments that they make in the present, to understand the impetus taken by the Jamaican authorities to justify why someone who may have threatened his own country’s democracy has been deemed a ‘threat to another territory’s national safety and security’

“The evil men doeth, live after them and at times even while they are still alive”, the statement ended.