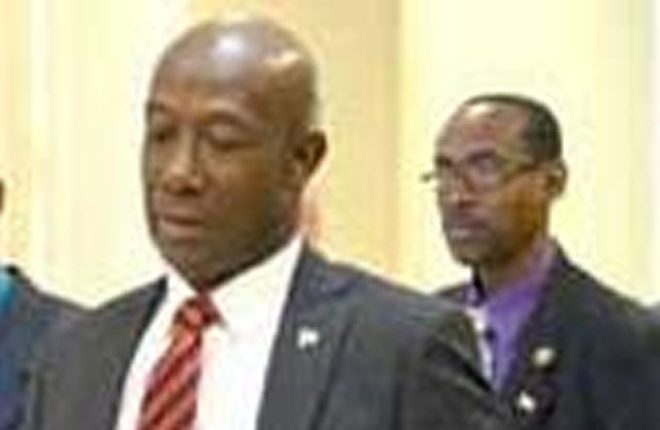 Port of Spain, Trinidad — Opposition leader Dr Keith Rowley was suspended from the Trinidad and Tobago Parliament at 9.15 on Wednesday night following a motion of no confidence and therefore will not be allowed to return to the House for the remainder of the session.

Parliament will automatically dissolve by June 17.

A total of 24 government members voted for Rowley to be kicked out of Parliament, with only the Chaguanas West MP, Jack Warner, who is also the leader of the Independent Liberal Party (ILP), voting against the motion. The vote was taken in the absence of the opposition members, who had walked out hours earlier.

Leader of Government Business Dr Roodal Moonilal had moved a motion of censure against Rowley, which stated he produced false information to the House when he brought some 31 emails to Parliament two years ago.

In the absence of the opposition, the motion was debated with contributions from Warner and government ministers Suruj Rambachan, Errol McLeod, Prakash Ramadhar, Rodger Samuel, Tim Gopeesingh and Prime Minister Kamla Persad-Bissessar.

The prime minister said a wheel of conspiracy was plotted against her government using fake emails, which she condemned Rowley for bringing to Parliament.

Persad-Bissessar said the opposition leader abused the privilege of the House because while he was entitled to freedom of speech, that freedom must be regulated and should have a foundation of evidence.

Persad-Bissessar went through some of the correspondence contained in the string of emails, saying there were elements of fact which were twisted into a wheel of conspiracy to make grave allegations against her and members of her government.

“We have shown today that there is no truth, there is no evidence whatsoever to support either the content of the email or the format of the email, whether the form, the structure, the context, and therefore, Mr Speaker, I join with others of this House in calling for censure of the Honourable member for Diego Martin West and for his suspension from this Honourable House,” said Persad-Bissessar as government members loudly thumped their desks in support.

She knocked Diego Martin North-East MP Colm Imbert’s contribution to the debate, noting he spent not a moment on addressing the issue of the fake emails, even though Moonilal had brought evidence to show the emails were not authentic.

She said when Rowley brought the emails to the House two years ago, he did so with conviction and put to the Parliament that she and her government members conspired to harm a journalist and bug the office of the DPP (Director of Public Prosecutions).

She pointed out the emails allege government members conspired to ensure the deputy head of the Strategic Services Agency (SSA), Keron Ganpat, left the country so the DPP’s office could be bugged.

Persad-Bissessar noted Ganpat did in fact go to Germany from September 2 to 13 to attend a security course at the George C Marshall European Centre for Security Studies.

This visit, she said, came after approvals from the permanent secretary and then national security minister Jack Warner in July that year.

“The approval was given long before you could even dream of these emails for September because September didn’t reach yet,” she said.

She said it was a fact he left the country but there was fabrication that he was instructed to do so in a conspiracy.

“They have bits of fact, predicting the past was very easy; they pick up one or two grains of truth but tie into this wheel of conspiracy,” she said.

Persad-Bissessar also referred to allegations in the emails there was a plot to bug the DPP’s office.

She noted thereafter there was a sweep of the DPP’s office and a Guardian report stating bugs were found.

The prime minister said there was a report from the acting commissioner of police, clearly stating no bugging device was found in the DPP’s office.

“They were alleging the attorney general hired some security firm and this security firm had this red light on the DPP’s building,” she said.

She noted there is no straight line of vision between the DPP’s office and the AG’s office for any red light to be used.

The prime minister added there was an email alleging the US Charge d’Affairs, Thomas Smitham, was in cahoots with government members in a conspiracy.

“That obviously is not a fact,” she said, noting it is true he came to Trinidad as the charge d affairs, but it is not true he came in September.

Persad-Bissessar said there was the allegation these emails were all tied to the Section 34 fiasco — an attempt to give freedom to businessmen Ishwar Galbaransingh and Steve Ferguson.

She stressed her government was busy trying to ensure no person could escape the law through Section 34.

She pointed out Section 34 was a clause that came about in the Senate, and the Lower House had no sight of it.

The prime minister outlined the actions her government took to ensure the clause was repealed.

Following the prime minister’s contribution, Moonilal wound up the debate and the vote was then taken.