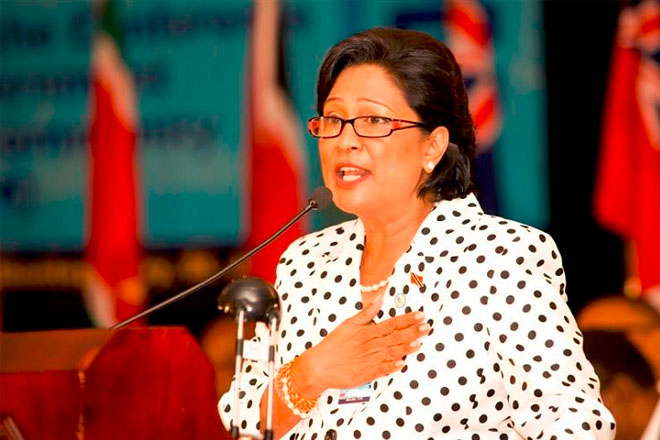 Port of Spain, Trinidad — Another allegation by Jack Warner – this time that marijuana was found at the home of Prime Minister Kamla Persad-Bissessar two years ago – has been dismissed.

Persad-Bissessar has told the embattled politician that if he has evidence of the ganja find and subsequent cover-up, he should take it not only to local police but to the Federal Bureau of Investigations (FBI) – the same agency that investigated him for alleged corruption at football’s world governing body, FIFA.

“More lies and distractions which I have placed in the hands of my lawyers” was the prime minister’s response after the Trinidad Express reported yesterday that Warner had submitted a statement to a Justice of the Peace claiming that on April 12, 2013, former deputy commissioner of police Mervyn Richardson came to Parliament and informed him that a packet containing four ounces of marijuana was found outside a window of Persad-Bissessar’s private residence.

“Should Mr Warner have any information about any wrongdoing he should take it to the police and the FBI,” the prime minister is quoted as saying in today’s Trinidad Express.

Griffith has denied the allegations.

“I have never held any meeting or even spoken to the Prime Minister, or Minister Moonilal or any police officer on this alleged matter, nor have any of them spoken to me about it . . .” he said.

Moonilal, meantime, contended that Warner had become “increasingly delusional” and was perhaps trying to wiggle out of being extradited to the United States to face corruption charges related to the time he served as vice-president of FIFA.

“Mr Warner, as you know, is wanted in the United States. Mr Warner is the most famous American fugitive in history. He is also out on bail in Trinidad and I think he is building a case that he can be arrested on criminal charges in Trinidad because, from what I read, Mr Warner is confessing to conspiracy to pervert the course of public justice,” Moonilal told reporters after an event in San Fernando yesterday.

“I think he is becoming very desperate. I will not be drawn into his circus and enter his side show . . . It is almost shocking that he is now swearing to lies and incrimination, which is very sad . . . We repeat the call for him to cooperate with the United States agencies.”

Since being indicted in the US on charges of racketeering, wire fraud and money laundering, Warner has levelled several charges against Persad-Bissessar and her United National Congress, including that he helped fund their election campaign in 2010.