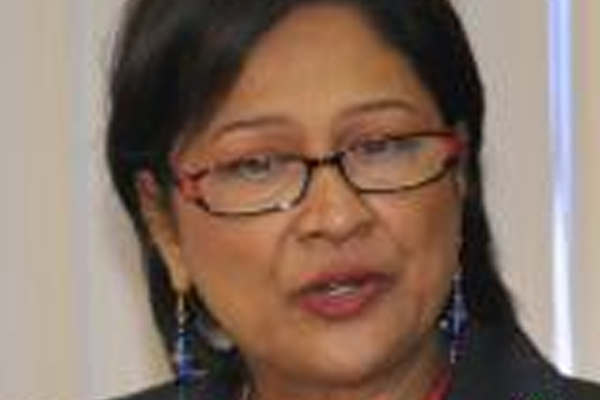 Port of Spain, Trinidad — Trinidad and Tobago’s Prime Minister Kamla Persad-Bissessar told the nation in a national address on Monday night that she has asked for and received the resignations of national security minister Gary Griffith and attorney general Anand Ramlogan.

Additionally, the prime minister relieved five other ministers of their portfolios including her own portfolio as minister of the people and social development.

The firing of Ramlogan and Griffith is the latest escalation of a recent controversy where the newly appointed director of the Police Complaints Authority (PCA) David West revealed that the attorney general had asked him to withdraw his witness statement in a defamation lawsuit in exchange for his selection for the job.

West then reported Ramlogan to the police for witness tampering.

The prime minister has called for an independent probe into the allegations that Ramlogan attempted to pervert the course of justice.

“While I am not in a position to determine neither guilt nor innocence in this matter … I cannot and will not sit idly by while the Office of the Attorney General and that of the Minister of National Security and the head of the Police Complaints Authority are being compromised and brought into disrepute by such allegations that have warranted a police enquiry,” Persad-Bissessar said.

“Those office holders preside over the administration of justice, law and order and so cannot remain in those positions while these investigations into allegations are made. I cast no aspersions on the capacity or performance of those that hold these positions but cannot have these offices be so embroiled in conflict and controversy eroding public confidence in the institutions which they lead,” she continued.

In her address, Persad-Bissessar said she has also asked that West tender his resignation. West is appointed by the president and the prime minister reiterated that West’s appointment as director of the PCA should be revoked.

Political analysts told local television stations they believe the other firings and replacement of ministers is in preparation for the upcoming general election, which is constitutionally due in September of this year.

The latest firings mean the prime minister has revoked the appointments of 28 substantive ministers and ministers with junior portfolios since she took office four years ago.

Persad-Bissessar’s record of relieving errant ministers of their duties has earned her approval in the eyes of the public. Polls done by pollsters over the last 12 months have shown that the prime minister’s favourability rating has risen as a result of her decisions to deal with errant ministers.

On Monday, the prime minister said she has asked the president to revoke the appointments of the following ministers:

She has asked the president to appoint the following persons as ministers:

Brigadier Carlton Alfonso as the new minister of national security

Garvin Nicholas, former press secretary to the prime minister and former high commissioner to London as the new attorney general.

Legal affairs minister Prakash Ramadhar will now have the ministry of justice of justice added to his portfolio.

Kwasi Matuma is the new minister in the ministry of works and infrastructure.

After the announcements, the public and the media expressed surprise over the revocation of the appointment of senate president Hamel-Smith.

Former national security minister Griffith confirmed to two local television stations that he did not resign, that he was in fact fired. But he said the prime minister has a right to relieve persons from her cabinet.

In a statement posted to his Facebook page, former attorney general Ramlogan said he comprehends and accepts the decision by the prime minister.

“I understand and accept the decision of the Honourable Prime Minister to relieve me of my duties as a senator and attorney general. The prime minister has acted in the public interest to uphold the constitution and the rule of law and I support these higher ideals,” he said.

He acknowledged that the task of being attorney general was a challenging one.

“The job of attorney general is a challenging and difficult one. I was marked from the day I was appointed, as I became a favourite target of forces opposed to the government. It has not been an easy ride but I am happy that I was given the opportunity to have been of service to my government and country.”

The former AG said he was thankful for all the support he got.

“I wish to thank the many who supported me during my tenure. My accomplishments, dedication and hard work would not have been possible without their loyalty and commitment. I am grateful that I had the opportunity to serve in the Peoples’ Partnership administration and wish to reassure the Honourable Prime Minister, my Cabinet colleagues and the public that I remain firmly committed to building a better nation for our children to inherit,” he said.

“As I did before, I shall continue to serve the less fortunate in our society as an attorney-at-law. I ask that due process be allowed to take its course so that the necessary investigations can be completed in a professional and expeditious manner. I am confident that the political conspiracy will be exposed justice will be done and that I will emerge victorious in the end,” Ramlogan added.

Persad Bissessar said that, had the national security minister informed her of the telephone conversation he had with West, the situation would have been a lot different.

She also suggested that the opposition leader had a moral if not legal obligation to inform her as prime minister, as well as the president, about the personal involvement of a witness in a defamatory statement involving himself, the leader of the opposition.

“One has to be mindful that public office is not used for private gain,” she said.

Persad Bissessar said that, had there been a disclosure by the opposition leader of the personal interest in a legal matter involving himself and the director of the PCA at the point of his nomination to be head of the PCA, the conflict of interest would have been declared.