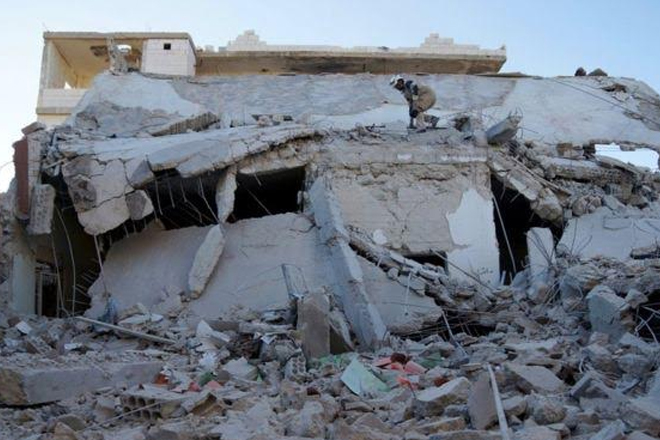 (BBC) Government forces are battling rebels for control of a strategically important town in southern Syria.

An army statement said troops and militiamen were advancing into Sheikh Miskeen on several fronts and had reached the main square.

Opposition activists said there were fierce clashes around the town and a heavy bombardment by Russian aircraft.

The government’s offensive is the first in the south since Russia launched air strikes in support three months ago.

The region is the last where secular and nationalist rebel factions still hold substantial territory, and Sheikh Miskeen lies on one of the main routes from Damascus to the city of Deraa and the Jordanian border.

The army said on Wednesday afternoon that troops had taken control of eastern and northern parts of Sheikh Miskeen and reached the town’s main square.

Earlier, a military source told the state news agency, Sana, that “terrorist organisations” inside Sheikh Miskeen had suffered heavy losses in the past two days and had started moving their operations centre to nearby Nawa.

The Local Co-ordination Committees, an opposition activist network, reported that there had been fighting around Sheikh Miskeen on Wednesday between rebels and advancing government forces, which it said were backed by Russian warplanes.

Russia’s defence ministry has confirmed it carried out air strikes in Deraa province on Monday and Tuesday, but not whether they were in the Sheikh Miskeen area.

The Syrian Observatory for Human Rights, a UK-based group that monitors the conflict in the country, said earlier that Russian air strikes in Syria had killed 2,371 people, including 792 civilians, since they started on 30 September.

Among the combatants killed were 924 rebels and 655 militants of so-called Islamic State (IS), which Russia says it is targeting along with “other terrorist groups”.

On Tuesday, the US expressed concern at the “marked and troubling” increase in reports of civilian casualties in Syria since the start of the Russian air campaign.

Last week, Russia rejected allegations by Amnesty International that it had used cluster munitions and unguided bombs on civilian areas.

Syria’s government and a US-led multinational coalition against IS are also conducting air strikes in Syria.

More than 250,000 people have been killed since the uprising against President Bashar al-Assad erupted in Deraa in March 2011. Eleven million others have been driven from their homes.