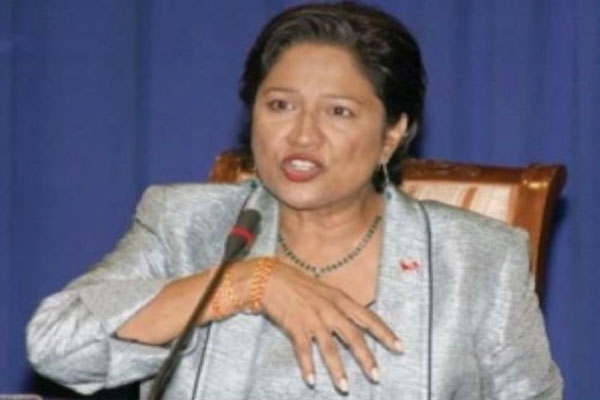 (CMC) The coalition People’s Partnership government Tuesday announced an all out attack on criminal elements in Trinidad and Tobago as the island recorded its 19th murder in just seven days.

Prime Minister Kamla Persad Bissessar, speaking to reporters after a meeting of the National Security Council (NSC) said that she was re-affirming her administration’s commitment to dealing with the crime situation.

“As Prime Minister today I re-affirm my commitment to our citizens that whatever we have to do to defeat criminals within the law, wherever they hide we will do it.

“I will not allow and evil and violent minority to continue to inflict harm, fear and tragedy on the lives of our citizens. Where ever you hide, whoever your accomplices are and whatever you believe you have done with impunity we will find you and you will be punished”.

She said at the meeting it was decided with “immediate effect, the Commissioner (of Police Stephenson Williams) has advised that all leave has been restricted in Trinidad and the Tobago Police Service so we can have all hands on deck in the fight against crime.

“This means all officers from the top to the bottom. There is to be a greater collaborative effort between the police and the Defence Force to maximize the use of all their resources in this matter.”

Persad Bissessar said that she would no longer tolerate excuses for failure by the protective and security forces, adding “violence by a very small minority is eating away at the freedoms and peace that the majority has a right to enjoy.

“A murder is not simply a murder. Violence is not simply violence,” she said, adding that “at no time can crime be considered acceptable and the recent spike in violence and murders has made the situation completely intolerable”.

Police Tuesday reported the latest three murders were committed in Arouca, east of Port of Spain, and in Cedros, in south Trinidad.

In Arouca 38-year-old Hezekiah Mark was shot and his body dumped in a drain opposite the house where he lived.

Police are also searching for the killers of Krishna Ramdeen, 63, and his wife Radha, 57, after their son discovered their bodies on the ground floor of their house.

The woman had been suffocated with a plastic bag and it is uncertain how Krihsna died, but police said there was blood everywhere.

Last year the country recorded 405 murders and Prime Minister Persad Bissessar said she would not be fazed by the fight against criminals adding “we will face them head on and we will win.

“The government and people of Trinidad and Tobago are demanding results now and therefore they must see results now,” she said.

On Monday, a senior member of the government said he was in favour of the resumption of hangings and Prime Minister Persad Bissessar said that legislation had been brought to Parliament, but did not find support with the opposition.

“Until such time as the opposition sees it fit to give that support we cannot implement the death penalty in that manner to save us from the various court cases, like the Pratt and Morgan” where the London-based Privy Council ruled that a delay in excess of five years or more would constitute ‘cruel and inhuman treatment’ contrary to the Constitution of Jamaica.

“That is a parliamentary challenge which we continue to have dialogue on. I know many people in the country believe the death penalty can be the panacea for dealing with murders but there are some who are not of that view and they see it as a plaster on a sore…”