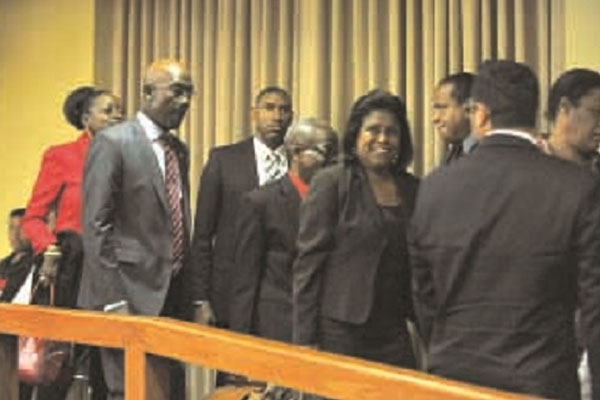 Port of Spain, Trinidad (Trinidad Express) — Party not done. But Parliament was done!

The Opposition People’s National Movement (PNM) came. It listened. And then, deeming the much-touted Government motion of no con¬fidence against Opposition Leader Dr Keith Rowley to be a monumental waste of time, turned the tables on the Government by staging a dramatic walkout, refusing to participate. The Government was left with only itself to convince.

“Speaker, this motion is frivolous and vexatious! This motion is childish! This motion has no basis, no purpose! It is empty, vacuous, tenuous! It is absurd!” Diego Martin North-East MP Colm Imbert thundered, his decibel levels rising with every sentence.

Packing up his papers, he declared: “And I am not staying in this Parliament to continue this foolish debate, I am getting out of here!” slamming his papers down on his desk defiantly. “Goodbye!” his colleague Patricia McIntosh, already on her feet with bag in hand, shouted.

“Whatever all yuh have to say, say it outside,” Imbert said, pointing his two thumbs over his shoulders. “If yuh name man, come outside!” he roared, taunting Government members before following the entire PNM bench as they exited the Chamber.

“It’s a lynching!” McIntosh fired. “Bunch of cowards!” Imbert yelled. The Government, which had brought out its supporters to Parliament yesterday, returned with chants of “coward”.

The PNM members, decked off in brilliant red, told its red army not to come to the

Waterfront in Port of Spain, not wishing to elevate the motion of no confidence in any way. But all its MPs, with the exception of San Fernando East MP Patrick Manning, turned up in the Chamber.

Imbert, who was the party’s sole speaker in the debate, dismissed the motion.

He said it had nothing to do with Opposition Leader Dr Keith Rowley, but rather was an attempt to damage the cre¬dibility of David West, whose witness statement contained damning disclosures about the whole Section 34 affair and the failed attempt to extra-dite United National Congress (UNC) financiers Ish Galbaransingh and Steve Ferguson.

At a news conference in the Opposition Caucus Room, at Tower D, International Waterfront Centre, Port of Spain, following the walkout, Rowley, staged an alternative debate, punctuated by desk thumping from his MPs and senators.

He associated himself with Imbert’s statements, saying the Government had given no other basis for censuring him other than the issue of David West’s appointment as Police Complaints Authority (PCA) director.

“This entire charade that you see here today in the Parliament was the continuation of the Prime Minister’s panic and her attack on David West, a witness which began with the collapse of the tenure of Anand Ramlogan, the former attorney general,” Rowley said to desk-thumping.

“The Parliament today was being used in a most frightening way to terrorise and discredit a witness who is before the court with an explosive piece of testimony. The Prime Minister, relentless¬ly, inclu¬ding today, has been seeking to destroy Mr West, under the figleaf of nonsense that he didn’t tell her and the Opposition didn’t tell her (that he was a witness in the Section 34 defamation lawsuit brought by Ramlogan against Rowley),” Rowley said.

The character assassination in the Parliament, Rowley said, was aimed at West. “And you have to ask yourself why is the Prime Minister working so hard in defence of Anand Ramlogan?… We now know through that testimony how Ish Galbaransingh and Steve Ferguson escaped extradition.”

Rowley noted West’s statement spoke of the “curious” instructions he received from Ramlogan and the fact the conduct of the matter in the court was “unusual” where the State, through the Attorney General, “did not raise certain objections that ought to have been raised”, such as the non-objection to the granting of bail.

He said the Prime Minister was not just prepared to use the Parliament to create the legislation in which Section 34 was “ensconced”.

“The Prime Minister’s behaviour is curious and frightening. Should we now demand answers of the Prime Minister as to whether if any person sought to get David West to remove or recant his testimony, whether such alle¬gations were known to her and whether she had any part whatsoever to do with the allegations made against the former attorney general?” he asked.

Imbert had stated earlier it was very hard to believe the Prime Minister did not do a due diligence.

system in the Commonwealth.

Imbert had also noted someone attempted to file a motion in 1912 and the Speaker pointed out it was dama¬ging, dangerous and nonsensical to have the Parliament debate such a motion.

“We will take no part in establishing this horrible precedent. What we in the PNM haven’t done for 59 years, we will not do in our 60th year,” he said.

On the statements he owned an apartment at One Woodbrook Place, Rowley said he has never been unemployed and his wife, an attorney of 30 years standing, and himself could purchase a flat.

Both Rowley and Imbert reiterated One Woodbrook Place was a project which started during the tenure of the Basdeo Panday government.