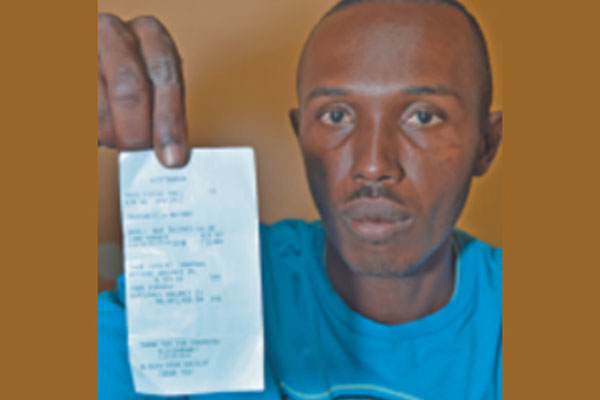 Port of Spain, Trinidad (Trinidad Express) — What would you do if you woke up one morning and found TT$100 million in your account?

That’s the reality facing Trinidad and Tobago Defence Force (TTDF) soldier Jason St John, who says he has no clue how the money ended up in his account.

St John, 34, said he got the surprise of his life on March 19, upon checking his account balance at the RBC Royal Bank ATM (automated teller machine) in Chaguanas.

John said only the day before, his balance read zero on his account. He explained: “I had a TT$20,000 credit-card limit which I am trying to clear, and my RBC branch in Cha¬gua¬ramas suggested I take a loan to clear the amount owed while they held my salary from the previ¬ous month (February) until I got it sorted out, and as far as I knew, when I checked the account that day (March 18), there was a zero balance.”

He said to make sure his eyes were not deceiving him, on March 19, he checked his balance at not only the RBC Royal Bank ATM in Chaguanas but also at the Republic Bank, First Citizens and Scotiabank ATMs, all with the same result.

After a week elapsed, John visited an ATM in Chaguanas and then RBC Royal Bank, Independence Square, Port of Spain, yesterday, hoping the jackpot money would have gone away, presuming it might have been a glitch or bank error, but things became even more perplexing to him. The money was still sitting in his account.

“When I got my slip, I didn’t know exactly what to do so I held it and wait until this month-end, and I went to the ATM to get an update to see if the salary is there and get an update on my salary, and this was my salary for this month that remain there, so the one from last month not even in the account, and then the balance here is 99 million, 993 thousand and 400 hundred and eight dollars and 84 cents (TT$99,993,408.94),” he explained.

St John said after all his loan payments are deducted from his main branch at Chaguaramas, he is entitled to the $6,591 he has at his disposal.

He said he needs the relevant banking authorities to look into his account.

“I just need answers and clarification because I have a family to feed and this is causing undue financial stress to me and them,” he said.

St John, who has been banking with the RBC Chaguaramas branch for close to ten years, says: “Several years ago, TT$5,000 went missing from my account and the bank blamed my wife but later decided to pay me back the TT$5,000 after discovering it was an error.”

He said he was made to come to the bank and sign an agreement in which he was paid the $5,000, and he explained later that month, the TT$5,000 was deducted from his account although the bank had made an arrangement to settle the outstanding amount.

The Express yesterday contacted regional manager of employee communications for RBC Royal Bank Nicole Duke-Westfield, who expressed shock upon hearing about the matter and later contacted the branch manager at Chaguaramas about St John’s case.

“The information as it regards to the client (St John) is confidential but the branch manager said that she was not aware of his situation. There are some issues regarding the account, not of our making,” explained Duke-Westfield.

Pressed further, Duke-West¬field said she was not in a position to divulge any further details.

She however urged John to go in and speak face to face with the Chaguaramas branch manager.