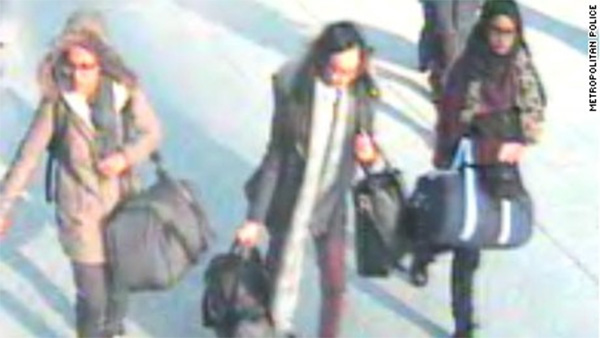 (CNN) — A top Turkish official is blaming British authorities for the disappearance of three teenage British girls suspected of traveling from London to Turkey with the goal of joining ISIS in neighboring Syria.

“It is condemnable and shameful on the part of Britain that three girls can just go from Heathrow Airport to Istanbul,” Deputy Prime Minister Bulent Arinc told reporters in Ankara on Tuesday.

Arinc accused British authorities of waiting three days before telling Turkish counterparts that the missing girls had flown to Istanbul.

“The search efforts are ongoing. If we can find them, great. If not, then it is the British authorities who are responsible, not Turkey,” Arinc added.

British police announced last week that the three girls had flown aboard a Turkish Airlines plane from London’s Gatwick Airport — not Heathrow — to Istanbul on February 17.

The next day, police contacted foreign liaison officers at the Turkish Embassy in London, a Scotland Yard spokesman said. This would be two days earlier than Arinc stated, though it’s not clear exactly when top officials in Turkey — not just at its embassy in England — learned what was happening.

“Since then, we have been working closely with the Turkish authorities, who are providing great assistance and support to our investigation,” the spokesman said.

A British counterterrorism officer said police were “reaching out to the girls using the Turkish media and social media” in an effort to persuade them to return home.

Shamima Begum, 15; Kadiza Sultana, 16; and Amira Abase, 15, are classmates at a London school. Their parents have publicly begged their daughters to come home.

In the days before they left for Turkey, at least one of the three girls allegedlycontacted a young woman, Aqsa Mahmood, who left her home in Scotland to travel to Syria in 2013 and is accused of seeking to recruit others via social media.

Aamer Anwar, an attorney for the Mahmood family, told CNN on Tuesday that the family was “somewhat surprised, horrified” that that contact had not prompted police action, “because they understood that Aqsa’s social media content was being closely monitored by the security services in this country.”

“And the real concern that arises is that if a known member of ISIS who’s now a poster girl for ISIS, seen to be recruiting and spreading propaganda, is in touch with young people in our country — that one would expect the courtesy of a knock on the door of these families, to advise them that their children may be on the cusp of radicalization or going off to Syria.”

The Mahmood family released a statement over the weekend in which they condemned their daughter’s actions, saying: “Your actions are a perverted and evil distortion of Islam.”

But they also said the UK security services “have serious questions to answer” over their failure to intervene after one or more of the missing girls was in touch with Aqsa via Twitter.

“Sadly despite all the government’s rhetoric on ISIS, if they cannot even take basic steps to stop children leaving to join ISIS, what is the point of any new laws?” the statement asked.

Anwar also queried how the three girls were able, as unaccompanied minors, to go through airport security controls and board a flight to Turkey — known to be a transit route to Syria — without any questions being asked.

Despite their condemnation of her actions, Aqsa Mahmood’s parents still hope she will return safely one day.

She remains in intermittent contact with them through social media but won’t answer questions, Anwar said. Her messages are mostly “extremely religious” in nature and justifying what she’s doing.

“They are just literally hanging on to her words, hoping that she’s alive when the contact comes through, that she hasn’t been killed by a drone or a bomb or whatever,” he said of her parents.

Turkey has become the most traveled route for volunteers trying to join Syria’s many armed factions since an anti-government uprising erupted in Syria more than three years ago.

Initially, Ankara maintained an “open door policy,” allowing hundreds of thousands of Syrian refugees to flee to safety in Turkey. At the same time, Turkish border guards looked the other way, taking few steps to stop activists, volunteers and journalists from crossing into Syria.

But with the rise of the ultra-violent Islamist group ISIS in Syria, the Turkish government increasingly came under criticism at home and abroad for not doing enough to stop jihadists from going through Turkey to get into Syria.

Historically, the Turkish-Syrian border, which runs more than 800 kilometers (500 miles), has been notoriously difficult for Turkish security forces to control. Before the Syrian civil war, both smugglers and Kurdish separatist guerrillas were known to operate illegally between the two countries.

Turkish government officials have bristled in response to accusations that they are not stemming the flow of foreign fighters joining ISIS.

Millions of tourists visit Turkey every year, where visas can be obtained upon arrival for citizens of many countries.

In a report on border security released last year, the Turkish Prime Minister’s office said, “It is easier to prevent people suspected of being members of radical groups from entering into Turkey than it is to prevent them from exiting from the Syrian border of Turkey.”

A spokesman for the Turkish President said British and Turkish security forces and intelligence agents are now working together to try to find the three British girls.