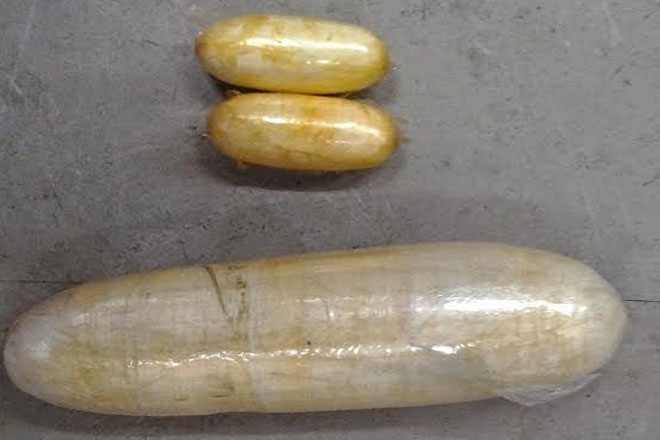 Two St. Lucian women busted in Guyana with cocaine in their vaginas

(St. Lucia News Online) Two St. Lucian women who travelled to Guyana last week for a vacation will remain in the country as guests of the Customs Anti Narotics Unit. They were arrested after being busted with a quantity of cocaine stashed in their vaginas.

The women, ages 38 and 43, were arrested by agents of the Customs Anti Narcotics Unit this afternoon (November 18, 2015) while heading through security at the Cheddi Jagan International Airport. They were about to board a Caribbean Airlines flight to their homeland.

The bust took place during a pat down of the two women.

Head of the Customs Anti Narcotics Unit, James Singh confirmed the arrests to News Source. He did not release their names as the investigations are ongoing. However, they are expected to be charged for drug trafficking before the end of the week.

The cocaine was reportedly concealed in plastic wraps measuring eight inches long and inserted into the women’s vaginas. The weight of the cocaine has not been determined up to the filing of this report.

Investigators are looking at the places where the women stayed and the people they met during their Guyana vacation.

The Customs Anti Narcotics Unit has been stepping up its monitoring at the two international airports and other ports of entry. For this year already, CANU has made several busts which have netted more than 500 pounds of cocaine.

Earlier this week, CANU agents busted two men in an East Coast Demerara hotel with a quantity of cocaine pellets. One of the men was caught swallowing the pellets. They have both been charged for conspiracy to traffic cocaine and have been refused bail.