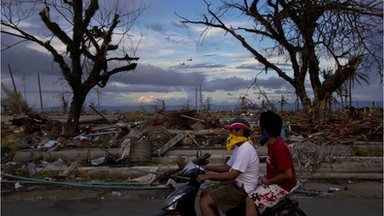 (BBC) The Philippine government says it is facing its biggest ever logistical challenge after Typhoon Haiyan, which has affected up to 11 million people.

Cabinet Secretary Rene Almendras said the government had been overwhelmed by the impact of Haiyan, one of the most powerful storms on record.

The official death toll stands at more than 2,200, but local officials and aid workers say it could rise much higher.

Meanwhile, aid is slowly beginning to arrive in the worst-affected regions.

The BBC’s Jonathan Head in Tacloban, a devastated city of 220,000 on Leyte island, says Wednesday brought the first signs of an organised response.

US military planes have been arriving at Tacloban’s ruined airport, delivering World Food Programme supplies, which can be carried by helicopter to outlying regions, and a French-Belgian field hospital has been set up.

Many people have left Tacloban, says our correspondent, but among those left behind there is a growing sense of panic and fear, not just of food running out but of law and order breaking down.

On Tuesday, eight people died when a wall collapsed as thousands of desperate survivors mobbed a food warehouse.

And on Wednesday there were reports of shots being fired in the street and of a teenaged boy being stabbed in the stomach.